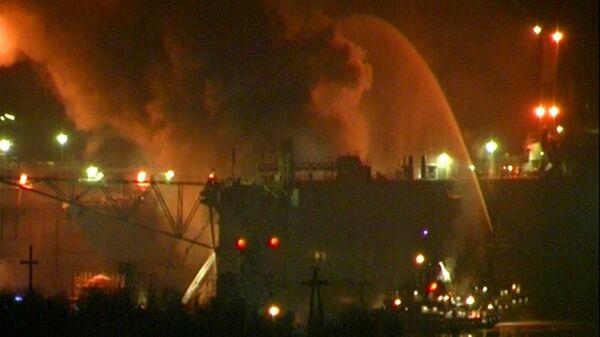 © Photo : TV 21
Subscribe
A fire that broke out on a Russian nuclear submarine in dry dock on Thursday has been put out, Emergencies Minister Sergei Shoigu said on Friday.

A fire that broke out on a Russian nuclear submarine in dry dock on Thursday has been put out, Emergencies Minister Sergei Shoigu said on Friday.

The Yekaterinburg Delta-class nuclear submarine caught fire on Thursday during repairs at a shipyard in the northwest Russian Murmansk Region, the local Emergencies Ministry department said.

Fire safety violations during routine maintenance works are seen as the most likely cause of the blaze at a floating repair dock.

President Dmitry Medvedev has ordered the Prosecutor General’s Office to thoroughly investigate the incident and to punish those guilty.

Investigators have questioned about 50 witnesses and seized documentation at the shipyard.

The submarine will be handed over to the Navy within hours, Shoigu said.

Deputy Prime Minister Dmitry Rogozin who oversees the defense industry said it will take several months to complete the repairs and bring the submarine back into service.

Officials said there was no radiation leak because the reactors had been shut down before repairs began.

Delta-class submarines have an outer skin of anechoic rubber, designed to absorb sound from sonars to make the boat harder to detect, but which could burn in a dry environment. The boat has a double hull of thick steel, however, which would protect its interior from external fire.

"There is no possibility of fire burning through the hull and no threat to on-board equipment," Serga said.

Military investigators have opened a criminal case under the statute “destruction or damage of military property due to negligence,” a spokesman for the Investigation Committee said.

The K-84 Yekaterinburg nuclear submarine is one of seven Delta-IV class submarines in service, all deployed in the Northern Fleet. It carries 16 Sineva (NATO classification "Skiff") submarine-launched ballistic missiles.

The Delta-IV class submarines are the core of the naval component of the Russian nuclear triad at present and may remain in service for another 10 years.