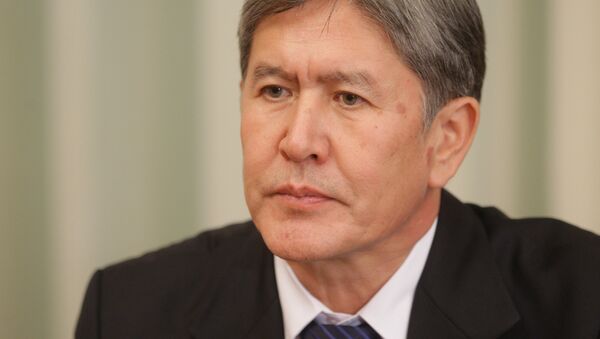 © Sputnik / Alexey Druzhinin
/
Go to the photo bank
Subscribe
Kyrgyz President Almazbek Atambayev described Russia as a key strategic partner but claimed that Moscow had not paid rent for military installations on the country's territory for the past four years.

Kyrgyz President Almazbek Atambayev described Russia as a key strategic partner but claimed that Moscow had not paid rent for military installations on the country's territory for the past four years.

The main strategic partner of Kyrgyzstan is Russia but the former leadership "did not leave a good legacy in relations with Russia," Atambayev said.

“Over the past year and a half we managed to establish relations with Russia, which were ruined by the former government,” he said, noting that a lot of support was afforded to the republic by Russian Prime Minister Vladimir Putin.

Atambayev said that he was able to reach an understanding also with Russian President Dmitry Medvedev, in particular on the issue of the payment of debt on the Russian side that has accumulated over the past four years for territories in the republic used as Russian military facilities.

Four Russian military facilities are situated on the territory of Kyrgyzstan, as well as an air base in the city of Kant.

Atambayev also said that the U.S. air base at the Manas International Airport in Kyrgyzstan should be closed, as it is a threat to the country.

“Kyrgyzstan does not need a military air base at the civilian airport, it is very dangerous. We want the Manas airport to only be a civilian airport,” he said at his first press conference.

The U.S. airbase at Manas was set up near the Kyrgyz capital Bishkek in 2001 in the aftermath of the 9/11 attacks in America to support military operations in Afghanistan. Under the current U.S. agreement with Kyrgyzstan expires in 2014.

Atambayev, 55, who served as the country’s prime minister, overwhelmingly won the October 30 presidential elections with 62 percent of the vote. Interim President Roza Otunbayeva, who took power after Kurmanbek Bakiyev was ousted as president amid large-scale popular protests in April 2010, was barred from running in the polls.