Putin calls for dialogue with opposition 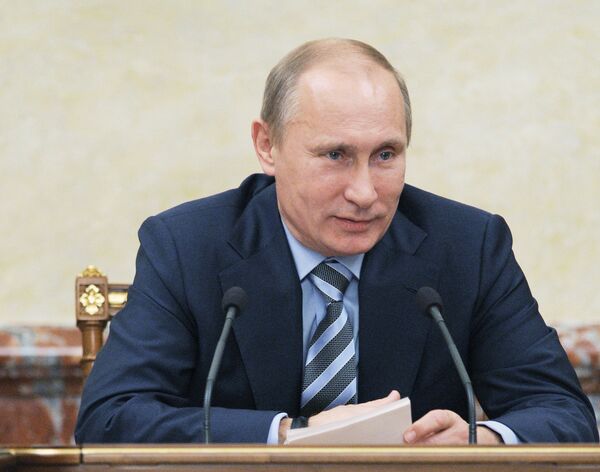 © RIA Novosti . Yana Lapikova
/
Go to the photo bank
Subscribe
Russian Prime Minister Vladimir Putin on Wednesday said he was ready for dialogue with the opposition, including his rivals at the presidential polls.

Russian Prime Minister Vladimir Putin on Wednesday said he was ready for dialogue with the opposition, including his rivals at the presidential polls.

Asked whether he would speak with Russian opposition politicians, including those who will run against him for presidency in the March elections, Putin said that “dialogue should be held, but in which form I will think about.”

Putin however did not specify if he would take part in televised debates ahead of the polls.

“It has nothing to do with fear…The opposition is not overloaded with any particular work, it is always demanding the impossible and then, as a rule, does nothing to fulfill it,” the premier said.

His comments came amid ongoing public protests against allegedly rigged parliamentary polls held on December 4 which brought Putin’s ruling United Russia party a majority in the lower house of parliament.

“We have never been against dialogue with the opposition…but I am against…any signs of extremism… (that) should be severely suppressed,” Putin said, referring to opposition activists demanding a rerun of the State Duma polls and carrying out liberal reforms.

Putin served two terms as president between 2000 and 2008 and during that time he consolidated authority in a strong executive branch, sidelining or abolishing many other political actors ranging from opposition parties to the legislature.

The prime minister refused to comment on the recent reshuffles in the government, saying that it would be better to ask Russian President Dmitry Medvedev about it.

There were several reshuffles among the government’s top positions over the last week, including the appointment of the former presidential chief of staff, Sergei Naryshkin, as the State Duma speaker.