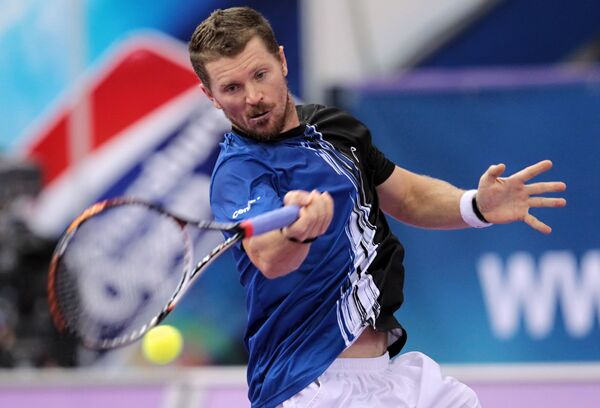 © RIA Novosti . Aleksei Danichev
/
Go to the photo bank
Subscribe
The U.S. Tennis Association has hit Russian authorities with a $75,000 bill to compensate for their investment in Alex Bogomolov, Jr., who switched allegiances to Russia earlier this month, an official said on Wednesday.

The U.S. Tennis Association has hit Russian authorities with a $75,000 bill to compensate for their investment in Alex Bogomolov, Jr., who switched allegiances to Russia earlier this month, an official said on Wednesday.

Bogomolov spent his formative years in the U.S. tennis system, and with the help of financial grants and coaching developed into a top-class pro, reaching a ranking high 34, the fourth-ranked American, this year.

The Moscow-born player, 28, swapped countries earlier this month after the approval of the International Tennis Federation, and now U.S. authorities want to recoup the loss.

"The American side did in fact issue us with an invoice for $75,000," Alexei Selivanenko, vice president of the Russian Tennis Federation, said. "This is the amount that was spent by their federations on Bogomolov all these years."

Selivanenko did not make it clear whether Russia would foot the bill for Bogomolov's development, but said he was glad that the issue has been raised internationally.

Russia has lost several players over the last few years, mainly to Kazakhstan, where grants for top-level players are more generous.

"There's no problem with the actual figure [of $75,000]," Selivanenko said. "It's quite objective. ... But we consider that everything should be decided on a larger scale that is fair towards all federations that have invested money, even 30 years ago, in developing players"

He added that the issue of financial compensation for players who “defect” would be raised at the next International Tennis Federation session.

Bogomolov is to make his debut for Russia in a first-round Davis Cup clash against Austria in February.