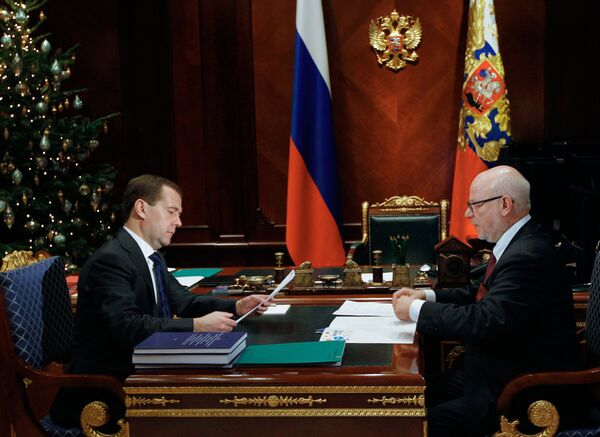 © RIA Novosti . Vladimir Rodionov
/
Go to the photo bank
Subscribe
The chairman of the Kremlin’s Human Rights Council, Mikhail Fedotov, on Tuesday handed a report on the analysis of the investigation into the death of Hermitage Capital auditor Sergei Magnitsky over to Russian President Dmitry Medvedev.

The chairman of the Kremlin’s Human Rights Council, Mikhail Fedotov, on Tuesday handed a report on the analysis of the investigation into the death of Hermitage Capital auditor Sergei Magnitsky over to Russian President Dmitry Medvedev.

“It is said there [in the report] that all the cases [relating to Magnitsky’s death] should be combined into one, and we proposed that the Investigation Committee should examine it,” Fedotov said adding that if one structure is engaged in the case, it will manage to figure out the cause and effect relations properly.

However, the Investigation Committee head, Alexander Bastrykin, declined the proposal, saying the Prosecutor General’s Office should probe the case.

Magnitsky was arrested and jailed without trial in November 2008 and died in police custody a year later after being denied medical care. The 37-year-old auditor had accused tax and police officials of carrying out a hefty $230-million tax scam.

The 75-page report entitled “The Torture and Murder of Sergei Magnitsky and the Cover Up by the Russian Government” includes more than 100 documents, photographs and media links proving that Russian officials systematically tortured Magnitsky in custody.

In July, the Kremlin's Human Rights Council said Magnitsky's death was the result of "calculated, deliberate and inhumane neglect." A separate investigation into the doctors' involvement in the case was launched in mid-July.

Two doctors, Larisa Litvinova, the chief doctor of the Butyrka prison where the lawyer died, and Dmitry Kratov, were charged with "causing death through negligence." The date for the court hearing has not yet been announced.

On December 8, Investigators reopened a probe into Magnitsky’s case, so that his family could use the right for his rehabilitation to clear him of tax evasion charges.