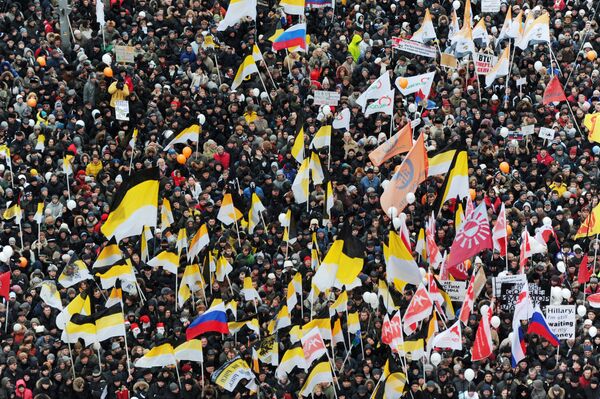 © RIA Novosti . Ilya Pitalev
/
Go to the photo bank
Subscribe
Protesters who rallied in Moscow on Saturday against the alleged mass electoral fraud at the December 4 parliamentary elections have no leaders and lack unity in their ranks, members of the ruling United Russia party said on Sunday.

Protesters who rallied in Moscow on Saturday against the alleged mass electoral fraud at the December 4 parliamentary elections have no leaders and lack unity in their ranks, members of the ruling United Russia party said on Sunday.

The rally, which was held in downtown Moscow on Saturday for the second time in two weeks, was better organized and was attended by new strong figures, such as the former Finance Minister Alexei Kudrin and anti-corruption whistleblower Alexei Navalny.

"The protest has absolutely no leaders as they do not recognize each other. What can we talk about, if they cannot even agree on how to call their protest movement?" said Vladimir Burmatov, a member of the United Russia faction in the lower house of parliament and deputy chairman of the State Duma committee for education.

The protest on downtown Moscow's Sakharov Avenue on Saturday pressed demands for new parliamentary elections and wholesale liberalizing reform in Russia, turning the temperature up on Prime Minister Vladimir Putin and his plans to return to the Kremlin.

Moscow police put the number of protesters within the space authorized for the rally at about 30,000 while opposition figures said 120,000 came to protest.

Kudrin who addressed the rally on Saturday called on its participants to pursue their demands for political change in an organized way and stay away from "revolution".

He called for the creation of a working group to work out proposals and enter dialogue with the authorities. In his opinion, new rallies are only required if the demands of Saturday's rally are not implemented.

In the meantime, Andrei Isayev, first deputy secretary of the United Russia General Council Presidium, said that the Russian authorities' recent proposals to reform the political system in Russia would cause the wave of protests in Russia to subside.

"It seems to me that many people have received answers to their questions both in the question and answer session held by Vladimir Putin with the nation and the state of the nation address by Dmitry Medvedev," Isayev said in a statement posted on the United Russia website.

Isayev said the authorities were ready for dialog with society and were prepared to implement political reforms.

The ruling United Russia party, led by Putin, won the December 4 State Duma elections, gaining nearly 50 percent, a sharp drop from over 64 percent it enjoyed at the previous election in 2007.

Independent observers and critics said the election to the lower house had been slanted in favor of United Russia and cited incidents of apparent ballot stuffing. Thousands took to the streets to protest the results. The authorities denied that major irregularities occurred, but admitted minor violations, pledging that they will all be investigated.