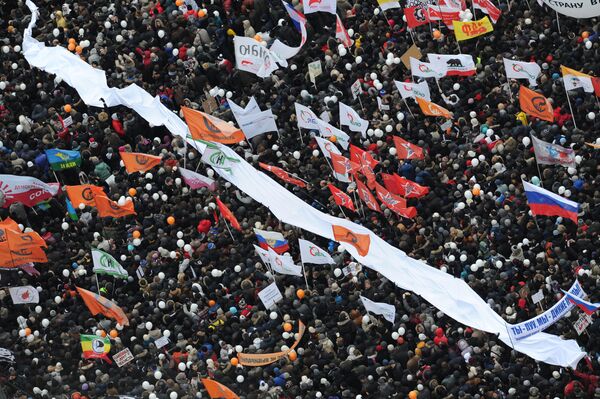 © RIA Novosti . Aleksei Filipov
/
Go to the photo bank
Subscribe
Geodesic engineer Nikolai Pomeshchenko, asked by RIA Novosti to use his professional equipment to count the number of protesters at Saturday’s rally, said at least 56,000 people attended the event.

Geodesic engineer Nikolai Pomeshchenko, asked by RIA Novosti to use his professional equipment to count the number of protesters at Saturday’s rally, said at least 56,000 people attended the event.

Tens of thousands of protesters rallied on Moscow’s Sakharov Avenue on Saturday to demand new parliamentary elections after claims that the December 4 vote was slanted in favor of the ruling United Russia party.

Police put the number of protesters within the space authorized for the rally at about 30,000. Opposition figures said up to 120,000 came to protest.

Over 700 reporters covered the protests, believed to be the largest in Russia’s history in the past two decades.

Earlier, after the December 10 protest rally on Moscow’s Bolotnaya Square, Pomeshchenko put the number of demonstrators at 60,000 - also above the official police figures and below the figures provided by rally organizers.

To estimate the number of people at yesterday’s protests, Pomeshchenko took a map of Sakharov Avenue on the screen of his laptop, photographs from the venue and drew lines restricting rally sectors with different people density.

He said the number of protesters on the square could exceed 56,000, but “we, geodesists, prefer to understate figures [than to overstate them].”

Protesters adopted a resolution calling for new and fair elections, open registration for all opposition parties by February 2012, the immediate release of all political activists detained during protests and the annulment of the December 4 election results they claim were rigged.

Other demands included the resignation of Central Election Commission chief Vladimir Churov, the prosecution of all those involved in ballot stuffing and a vote against Prime Minister Vladimir Putin, who is widely believed to be able to win the March 4 presidential elections in Russia to return to the presidential post he held in 2000-2008.