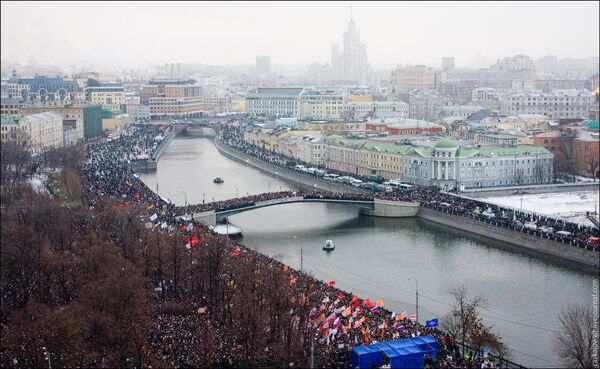 Russia braced for another mass protest in the heart of the capital Saturday by voters angry over recent elections won by Vladimir Putin’s United Russia party, while the Kremlin countered critics’ complaints with stunning calls of its own for dramatic political reform.

Russia braced for another mass protest in the heart of the capital Saturday by voters angry over recent elections won by Vladimir Putin’s United Russia party, while the Kremlin countered critics’ complaints with stunning calls of its own for dramatic political reform.

Tens of thousands of people have taken to blogs and social networks to pledge participation in the rally, expected to be addressed by figures ranging from Mikhail Gorbachev and corruption whistleblower Alexei Navalny to rock musician Yury Shevchuk and novelist Boris Akunin.

Russian billionaire Mikhail Prokhorov, who has plans to run in the presidential elections next year, also set to take part in Saturday's protest in Moscow against alleged vote fraud.

His spokesperson says, that Prokhorov would mingle with the crowds at the protest and would only speak if the organizers called him onto the stage.

The scheduled rally is the second of its kind in as many weeks following the mass demonstration on December 10 – the largest protest in Russia in nearly two decades – and will further test popular support for Putin, 59, who has announced plans to return as president next spring.

The overriding complaint from the demonstrators is that parliamentary elections held on December 4 and won by United Russia were fraught with cheating and should be rerun.

Putin, President Dmitry Medvedev and other top officials have vowed that reported violations would be investigated and infractions punished. They have however downplayed the impact of any irregularities and have given no quarter to demands for an election rerun.

Putin has also blamed the United States for encouraging the vote protests.

But while the freshly-minted State Duma, or lower house of parliament, has already held its first session and while Russia’s ruling tandem has shown no appetite for an election repeat, the Kremlin has in recent days signaled a readiness for potentially dramatic reform in the country.

In his farewell state of the nation address on Thursday, Medvedev proposed sweeping changes to the current political system – changes including direct, popular election of regional governors and simplified criteria allowing political parties to register and take part in national politics.

“Our democracy is becoming more mature,” Medvedev, who leaves office soon after the next presidential election in March, said in his address.

The following day, a top official long regarded as the “grey cardinal” of the Kremlin under both Putin and Medvedev and an influential architect of Russia’s current political system, described that system as “corrupt,” “stupid” and not even respected by politicians at its heart.

“The best part of our society, or let’s say its most productive part, demands respect,” Vladimir Surkov, first deputy head of the presidential administration, told the daily Izvestia in an interview published Friday.

Asked whether he was nervous about current political tensions and the threat this could pose to the government, Surkov stated: “Who wants to protect corruption, injustice? Who wants to defend a dull and stupid system? Nobody! Even those who are part of this system will not want it since they do not feel they are right.”

Some opposition activists have dismissed the Kremlin calls for reform this week as nothing more than a concerted ruse to distract and divide the vote protesters. Others however, both at home and abroad, have welcomed the moves and encouraged them to be pursued in practice.

“The measures announced by President Medvedev are important steps towards strengthening Russian democracy,” Thorbjorn Jagland, secretary general of the Council of Europe, said in a statement.

In addition to demanding a rerun of the December 4 Duma elections, vote protest leaders have also voiced other demands ranging from dismissal of the country’s top elections official to lowering administrative barriers so that more opposition parties can take part in future elections.

No one – government officials, opposition activists and casual observers – has been able to speak recently with much certainty about exactly where the vote protests could lead, though most agree that turnout for and conduct of Saturday’s rally will likely provide indicators for the future.

Putin, who served two terms as president between 2000 and 2008 but was constitutionally barred from seeking a third consecutive term, announced in September that he and Medvedev, his hand-picked successor, would switch jobs following the presidential elections next March.

Last month, Putin accepted the United Russia party’s nomination as its presidential candidate in that election and despite the current protest mood in Moscow most political forecasters agree that he is almost certain to win and return to the Kremlin.