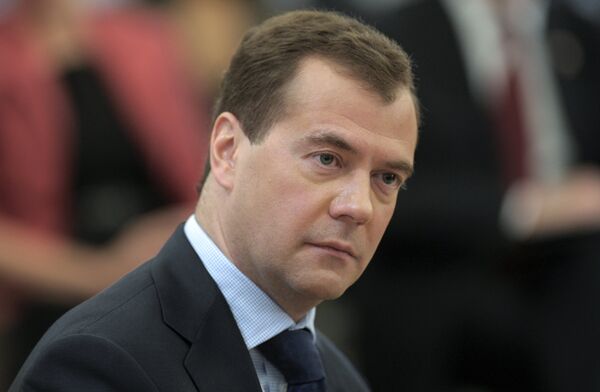 Russian President Dmitry Medvedev has submitted to parliament draft bills easing the rules for registering political parties and presidential candidates as part of his program of sweeping political reforms, Kremlin said on Friday.

Russian President Dmitry Medvedev has submitted to parliament draft bills easing the rules for registering political parties and presidential candidates as part of his program of sweeping political reforms, Kremlin said on Friday.

The move comes the day after Medvedev’s final state-of-the-nation address, in which he proposed bold measures to reform Russia’s political system.

The reforms include, among others, the return of direct elections for regional governors that were abolished in 2004 by the then president Vladimir Putin, easing the rules for the registration of presidential candidates and political parties as well as the creation of a public TV network that will not be directly influenced by the Kremlin.

Medvedev’s draft bill proposes that presidential candidates nominated by parties that lack parliamentary representation should be able to gather 100,000 signatures instead of current two million for nomination. The number of signatures necessary for the registration of self-promoted candidates will be dropped to 300,000 from two million.

The political overhaul, largely viewed as an effort to quell a wave of mass anti-Putin protests and to improve his falling approval ratings ahead of the presidential polls in March, would also allow political parties to have no less than 500 members in order to be registered, while the current threshold stands at 50,000, according to Medvedev’s draft bill.

The promising reforms, however, apply to the next parliamentary and presidential elections which are due to be held in five and six years-time.

The Kremlin’s critics quickly reacted to Medvedev’s proposals, saying the president had responded to their demands after several nationwide protest rallies against alleged vote fraud. Not everybody, however, believes Medvedev’s ideas will come into force.

"How can we believe these promises when they contradict everything they've done for the past 10 years," the Wall Street Journal quoted on Friday Sergei Petrov, A Just Russia party member. "They're just trying to trick people with this."

On Thursday, the speakers of both houses of the Russian parliament dismissed any connection between Medvedev’s speech and the opposition’s demands.

Moscow is set for another authorized mass rally calling for fair elections on December 24, which is expected to bring together no less than 50,000 people.