Medvedev’s reform call not due to protests - lawmakers 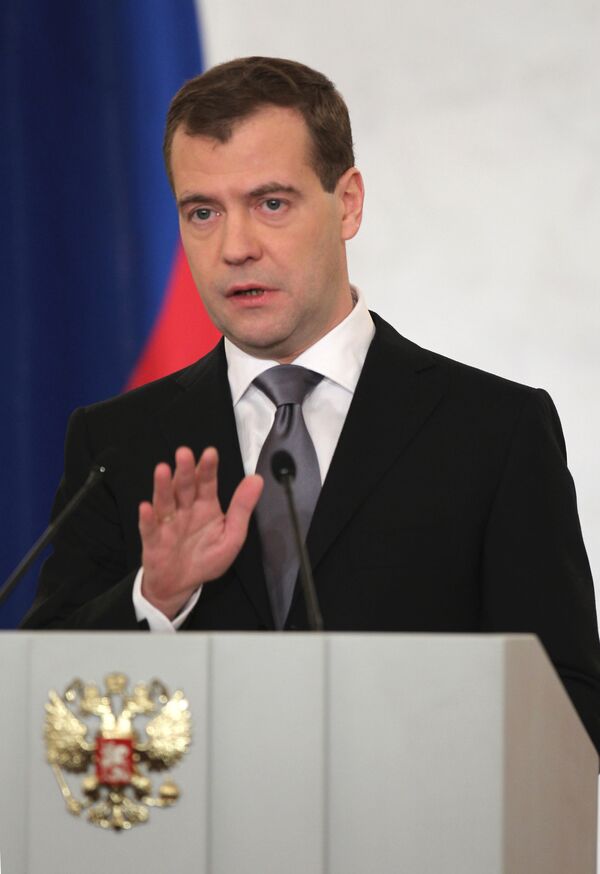 Russian President Dmitry Medvedev’s proposals for reforming the country’s political system are not linked to recent protest rallies against unfair elections, the speakers of both houses of parliament said on Thursday.

Russian President Dmitry Medvedev’s proposals for reforming the country’s political system are not linked to recent protest rallies against unfair elections, the speakers of both houses of parliament said on Thursday.

In his final state-of-the-nation address before he steps down next year, Medvedev proposed on Thursday a sweeping reform of Russia’s political system, including direct elections for regional governors.

“Some will say the proposals appeared due to the pressure of Bolotnaya Square [one of the protest sites in Moscow]. [But] part of the proposals were discussed earlier,” said newly elected State Duma speaker Sergei Naryshkin, who had earlier been the Kremlin administration chief and involved in preparing the president’s Address to the Federal Assembly.

Valentina Matviyenko, the speaker of the upper house, the Federation Council, also said it was wrong to link Medvedev’s proposals to the protest rallies. “It is very important that these proposals to reform the political system have been nurtured by the president for a long time, and they have repeatedly been discussed,” she said.

Medvedev’s proposals come after mass demonstrations in Moscow on Bolotnaya Square and at other venues, as well as in other cities, against alleged electoral fraud in favor of Prime Minister Vladimir Putin’s United Russia party at the December 4 parliamentary polls. Tens of thousands of people are expected to participate in a new rally in Moscow on Saturday.

United Russia gained nearly 50 percent in the State Duma, down from almost 65 percent, while three other parliamentary parties significantly boosted their representation.

Independent observers and critics claimed the election to the lower house of parliament was slanted in favor of United Russia and cited incidents of ballot stuffing. The authorities have said the elections were fair and only minor irregularities occurred, although they pledged to investigate all violations.

Vladimir Ryzhkov, a co-chairman of the unregistered People’s Freedom Party (Parnas), told RIA Novosti that Medvedev’s address took into account the demands of Bolotnaya Square protesters but that his initiatives were not enough.

“Of course, the president has heard society’s demands and made a step forward… He in particular admitted that deep political reform is required, that there should be a free registration of parties, single-member constituencies, direct election of governors and that the election commission formation systems should be changed,” Ryzhkov said.

“These are all demands voiced at Bolotnaya Square. These are the most radical steps in many years,” he said, adding however that these were “half-measures.”

In his state-of-the-nation address on Thursday, Medvedev also called for a drastic simplification of the rules governing the registration of political parties, as well as an electoral system of proportional representation in the lower house of parliament.

Direct governor elections were scrapped by then-President Vladimir Putin in 2004. Putin, who is set to return to the Kremlin in the upcoming spring, oversaw the tightening of the registration rules for parties and expulsion of single-mandate lawmakers from the State Duma.

Medvedev also proposed on Thursday cutting the number of signatures necessary for the registration of independent presidential candidates from the current two million to 300,000. Candidates nominated by parties that lack parliamentary representation will have to gather 100,000 signatures, according to Medvedev’s proposal.

Parties vying to be registered in order to participate in legislative elections will have to submit 500 signatures from their supporters instead of the current 40,000, Medvedev said, while half of 450 seats in the lower chamber of the parliaments will go to single mandate candidates.

Medvedev did not specify any details of when these changes might take effect. The present Duma elected earlier this month will serve for five years, while the next Russian president will head the country for six years. Putin has pledged to make Medvedev prime minister if he is elected president in March.