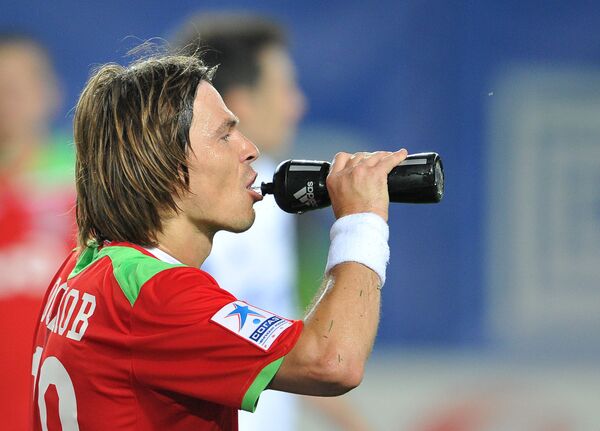 Lokomotiv Moscow must return to the pinnacle of Russian football and be perennial title challengers, captain Dmitry Loskov said Thursday.

Lokomotiv Moscow must return to the pinnacle of Russian football and be perennial title challengers, captain Dmitry Loskov said Thursday.

The team has struggled to make an impact on the league's top three in the last five years, riddled with inconsistent form that has seen them go through nine coaches in that time.

"We need to set the highest possible standards for ourselves," said Loskov, who scored the winning goal in the 2002 title decider against CSKA Moscow and is in his second stint with the club.

"We have developed a good young group of players, building a team for the future. ... We have to be the champions in the near future," said Loskov, a midfield playmaker who has made more than 300 appearances over 13 years with Lokomotiv.

Lokomotiv's only silverware in the last five years has been the 2007 Russian Cup, won thanks to an extra-time goal from Scottish forward Garry O'Connor. The last four seasons have seen the so-called Railway club finish seventh twice, then fourth, and fifth last season.

This season, currently in its winter break, promises to be relatively succesful for Lokomotiv, who are in fifth but just two points off Dinamo Moscow in third, with 14 games to go.

The upswing comes despite behind-the-scenes turbulence: In July, coach Yury Krasnozhan was fired after unsubstantiated accusations by club bosses of match fixing.

Krasnozhan's departure came despite the club enjoying a succesful start to the season, leading to speculation of infighting between him and chairwoman Olga Smorodskaya. Krasnozhan has since been heavily linked with the vacant post at Anzhi Makhachkala, the billionaire-backed club from Dagestan.

Supporters, however, applauded Smorodskaya's appointment of Portuguese coach Jose Couceiro, who has lost just three of his 16 games since joining in July.