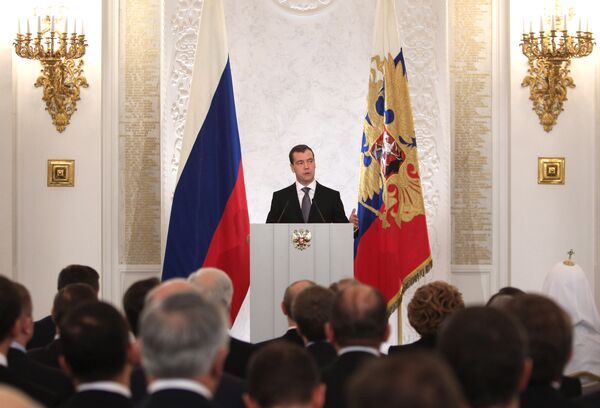 “I propose a comprehensive reform of our political system,” Medvedev said in his final state-of-the-nation address before he steps down next year.

Speaking at the Kremlin’s ornate Georgiyevsky Hall, Medvedev also called for a drastic simplification of the rules governing the registration of political parties, as well as an electoral system of proportional representation in the lower house of parliament.

Direct governor elections were scrapped by then-President Vladimir Putin in 2004. Putin, who is set to return to the Kremlin in the upcoming spring, oversaw the tightening of the registration rules for parties and expulsion of single-mandate lawmakers from the State Duma.

Prime Minister Putin sat in front of his hand-picked successor Medvedev during his 70-minute speech, and did not demonstrate any emotions, according to the live report from the Kremlin.

Medvedev also proposed on Thursday cutting the number of signatures necessary for the registration of independent presidential candidates from the current two million to 300,000. Candidates nominated by parties that lack parliamentary representation will have to gather 100,000 signatures, according to Medvedev’s proposal.

Parties vying to be registered in order to participate in legislative elections will have to submit 500 signatures from their supporters instead of the current 40,000, Medvedev said, while half of 450 seats in the lower chamber of the parliaments will go to single mandate candidates.

Medvedev did not specify any details of when these changes might take effect. The present Duma elected earlier this month will work for five years, while the next Russian president will head the country for six years. Putin has pledged to make Medvedev prime minister after being elected president in March.

Medvedev’s proposals come after mass demonstrations in Moscow and other cities against alleged electoral fraud in favor of Putin’s United Russia party at the December 4 parliamentary polls. Tens of thousands of people are expected to participate in a new rally in Moscow on Saturday. The party barely hung on to the majority in the State Duma, while three other parliamentary parties significantly boosted their presence.

Putin has said after the first protests that they aim to delegitimize his own presidential bid and warned off foreign involvement in Russian politics, a mantra he has resorted to after the Western-backed popular uprisings in Ukraine and Georgia in the early 2000’s led to regime changes in the two post-Soviet countries. Medvedev repeated the same sentiments on Thursday.

But it was Putin who first mentioned the possibility of returning popular elections for governors during his annual call-in television show last week. Putin then specified though that the candidates should be initially approved by the presidential administration. Medvedev made no mention of this prerequisite during his speech on Thursday.

Medvedev said that the December elections demonstrated the need to establish a better dialog between authorities and civil society. Many political analysts attributed the post-election protests to the lack of political alternatives in Russia and dominance of Putin and his United Russia in the political landscape.

Not a single opposition party has been registered since 2000 when Putin came to power, and all other parties had been sidelined by the United Russia, that enjoyed the constitutional majority in the previous Duma and dominated over all regional legislatures in decision- and policy-making.

Medvedev made other populist pledges in his state-of-the-nation address. As part of his anti-corruption campaign, he suggested establishing control over spending by senior state officials, in addition to the already introduced procedure in which they declare their incomes. This initiative is part of a United Nations anti-corruption convention and has been torpedoed repeatedly by Russian lawmakers in the past.

Medvedev also promised on Thursday to maintain the federal budget’s social and military expenditures, despite warnings by many Russian economists, including former Finance Minister Alexei Kudrin, that social obligations and growing military spending would put Russia on the brink of financial collapse if global oil prices fall.

The president also pledged to start the process of decentralization of power in Russia, in which some of the functions, responsibilities and finances accumulated from the regions by the federal government during Putin’s rule would be returned to regional and municipal authorities.

This was Medvedev’s fourth annual state-of-the-nation address while in office. His first one in 2008, he called for political reforms in Russia that ended with constitutional amendments extending the presidential term to six years and the parliamentary term to five years from the previous four years. Medvedev’s second address was dedicated to the broad modernization of the Russian economy and limited modernization of Russia’s political system. These two addresses helped the president project himself as a potential reformer in the eyes of many educated Russians and foreign Russia observers. His third address delivered last year was widely expected to lay down Medvedev’s program for the next presidential term, but was unexpectedly dominated with children’s issues, strongly shuttering public confidence in Medvedev’s reformist ambitions.