'Beast from the East' welcomed into national bandy team setup 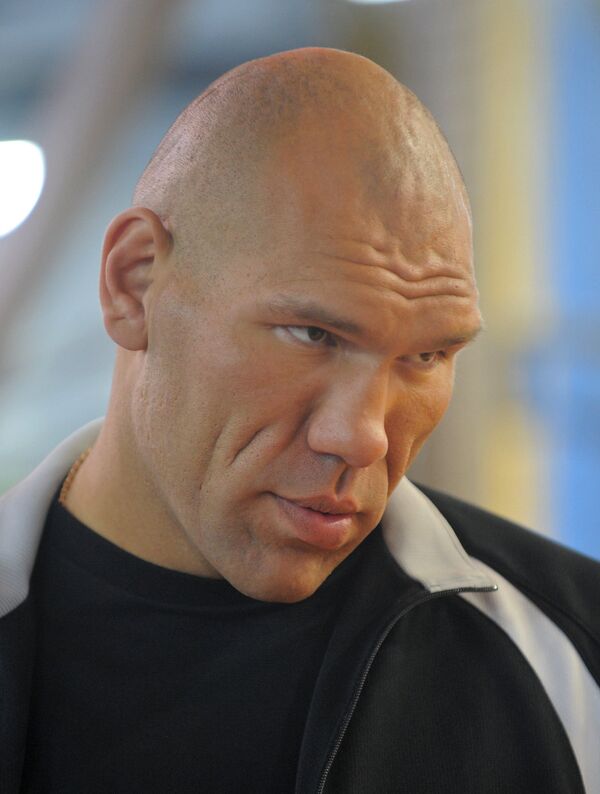 © RIA Novosti . Grigoriy Sisoev
/
Go to the photo bank
Subscribe
The Russian national bandy team on Thursday welcomed an unlikely ally into their corner as they fight to make their particular brand of ice hockey as popular as the traditional form.

The Russian national bandy team on Thursday welcomed an unlikely ally into their corner as they fight to make their particular brand of ice hockey as popular as the traditional form.

Boxing champion Nikolai Valuev, a 7-foot, 2-inch (2.18 meter) giant known as the Beast from the East, was last month appointed general manager of the national team of bandy, which resembles regular hockey except the puck is replaced by a bright orange ball and the field and teams are larger.

"I think it was a good appointment," national team midfielder Yury Pogrebnoi, who plays for Dinamo Kazan, told RIA Novosti. "He's a newcomer to this form of sport. He needs to adapt. We'll see how it works out, but it's great that people like this are getting into bandy - people known the world over."

Valuev, a former WBA title holder who retired in 2009 with 50 wins, two defeats and a no-contest in a 53-fight career, had no formal link to bandy before being handed the ambassadorial role, but was fond of the sport as a child. He told the Sport-Express daily earlier this week that he had to abandon it when teachers couldn't find skates big enough for him after a formidable growth spurt.

Valuev is well positioned to raise the sport's profile as a member of Russia's new parliament with Prime Minister Vladimir Putin's United Russia party, and views it as his mandate to protect an intrinsic part of Russia's cultural history.

The statistics show that the sport needs to start punching above its weight: Bandy, with some 3,700 registered players nationwide, has some way to go to compete with ice hockey, which has upwards of 75,000 players, according to their respective federations.

Unsurprisingly, the Russians are the world champions in a sport they invented and that dates back, by most accounts, to the 1700s. The predecessor to modern ice hockey, bandy is sometimes referred to as "football on ice" as it is played on a football-sized field, has 11 players on each side and lasts 90 minutes.

Its genuine popularity doesn't extend far beyond Russia and Scandinavia, the home of the only other world champions in Sweden, although 27 countries now boast bandy federations and there are calls to add it to the 2018 Olympics in Pyeongchang, South Korea.