Ukrainian president says not against lawful release of Tymoshenko 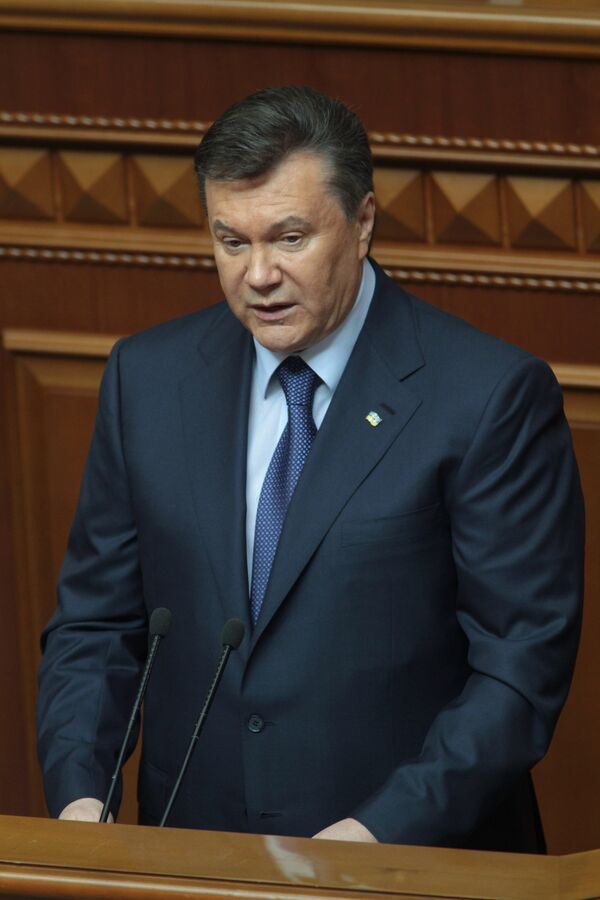 © RIA Novosti . Grigory Vasilenko
/
Go to the photo bank
Subscribe
Ukrainian President Viktor Yanukovych said on Wednesday that he is not against the release of embattled ex-premier Yulia Tymoshenko serving a prison term for abuse of office but that the probe into her past activities will continue.

Ukrainian President Viktor Yanukovych said on Wednesday that he is not against the release of embattled ex-premier Yulia Tymoshenko serving a prison term for abuse of office but that the probe into her past activities will continue.

“I am not against Tymoshenko being released under certain legal circumstances,” Yanukovych told journalists in Kiev, adding that the Constitution bans him from interfering in the judicial system.

The president said opposition leader Tymoshenko could be released should parliament decriminalize the article of the Criminal Code under which the ex-premier had been convicted.

The ex-premier was jailed in October for seven years on abuse of office charges over a gas deal she concluded with Russia in 2009. The verdict was internationally condemned as politically motivated, which the Ukrainian authorities denied.

“The investigations cannot be stopped, the criminal cases will be considered. No one has the power to interfere,” he said.

On Tuesday, the Kiev Court Of Appeals decided to consider Tymoshenko’s appeal of the verdict on her case in absentia. Lawyers for the opposition politician say that she cannot visit the hearings due to ill health.

Since her conviction on the abuse of office charges, prosecutors have reopened an investigation into tax evasion dating from the second half of the 1990s, when Tymoshenko was the head of United Energy Systems of Ukraine.

The European Union has strongly criticized the jailing of Tymoshenko, calling the decision to imprison her politically motivated.

Ukraine and the EU have finalized negotiations on the Association Agreement, a deal that could set the former Soviet republic on the way to full membership, but the EU said the signing and ratification of the agreement will depend on the situation around Tymoshenko and on Ukraine’s 2012 parliamentary elections.