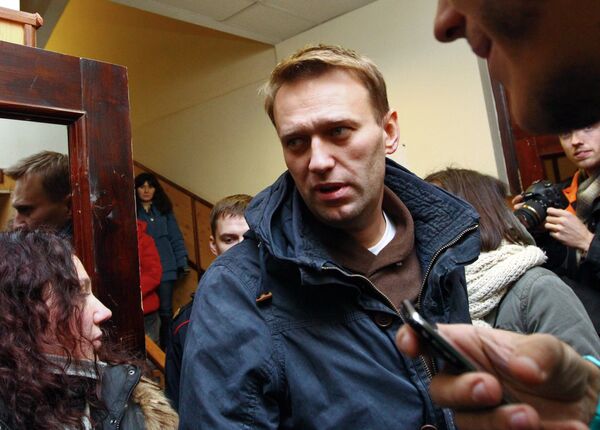 Both men have been sentenced to 15 days in jail for disobeying police orders during protests in Moscow a day after the December 4 parliamentary elections, which the opposition claimed were fraudulent.

Navalny's lawyer Vadim Kobzev said the blogger was greeted by "dozens of journalists and supporters" when he was leaving a district police department.

"All those 15 days I followed the events in Moscow. We saw photographs from the [December 10 rally in] the Bolotnaya Square, and we were very pleased," the opposition "Solidarity" movement leader told RIA Novosti, adding that his first plans were to have a good sleep.

More than 300 protesters, including Yashin and Navalny, were detained during the December 5 demonstration at Chistiye Prudy, which gathered some 2,000 people, according to police estimates.

The protest against what many view as widespread vote rigging in favor of Prime Minister Vladimir Putin's United Russia party during the December 4 polls was authorized by the authorities. Police dispersed the demonstration, however, when a crowd began marching towards downtown Moscow, which had not been permitted.