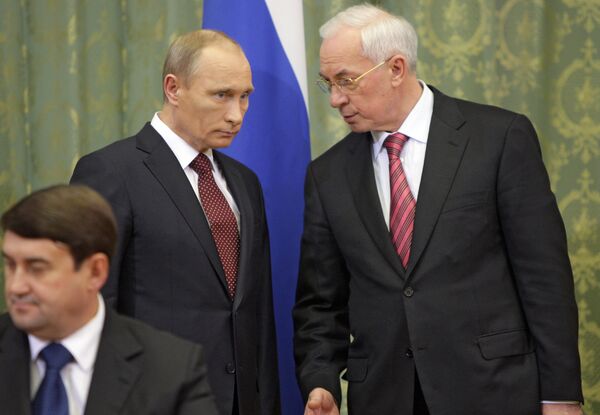 "Of course, we should continue our energy cooperation efforts, we should develop them and propose more steps for progress in this sphere," Putin said. "We had opportunities for a discussion before, and we have an opportunity now."

"And we have something to talk about," Azarov answered. "Our colleagues are always in contact."

"We are ready to search for compromise solutions, but it should be win-win deals," the Ukrainian premier went on. "That's why I hope that today's talks will give an impetus to the search of the final decision."

Azarov expressed hope that the talks will produce results, though they are taking place late at night.

Putin also said that the Russian-Ukrainian trade will amount to $50 billion and surpass pre-crisis levels, with Ukraine being Russia's fourth largest trade partner after China, the Netherlands and Germany.

The talks continue at the moment, but they are closed for the media.

Azarov told a news conference in Prague on Monday that Ukraine and Russia had recently stepped up talks on Russian gas supplies to his country and that he hoped to reach a compromise on the issue during his visit.

Ukraine has long sought to alter the terms of the 2009 gas deal it signed with Russia. The deal ties the price of gas to oil prices, which have risen strongly since 2009, boosting Ukraine's gas bill. The contract also says Ukraine must import no less than 33 billion cubic meters of gas from Russia.

Kiev wants to reduce both the price and the volume of gas imports.

Russian energy giant Gazprom CEO Alexei Miller announced last week, however, that "no New Year presents" should be expected in bilateral talks on a reduction in the price of Russian natural gas.