Putin and the “magnificent seven”: All set for an interesting election 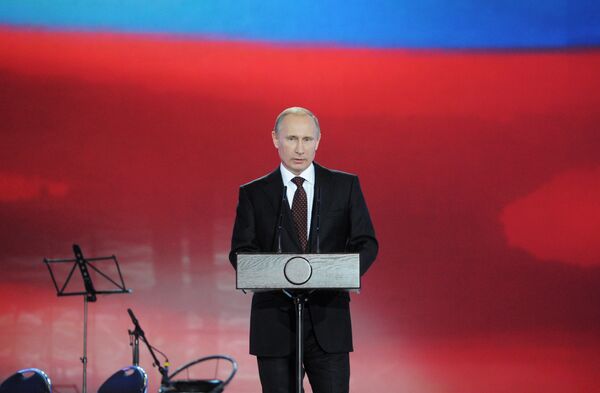 The March 2012 presidential elections, which many thought would be a mere formality after Medvedev and Putin announced their decision to swap places, are taking on new, intriguing features. They may even become a survival test for Russia’s political system, showing whether any political change in Russia’s leadership is possible. This has suddenly become very important to the general public.

The March 2012 presidential elections, which many thought would be a mere formality after Medvedev and Putin announced their decision to swap places, are taking on new, intriguing features. They may even become a survival test for Russia’s political system, showing whether any political change in Russia’s leadership is possible. This has suddenly become very important to the general public.

Vladimir Putin’s victory is still a dead cert, yet the public wants to see the mechanism of “regime change” in motion, even if it is only a dry run. For the first time ever, it is not the authorities’ supporters but their opponents who are talking about Putin getting yet another guaranteed 12-year term in office.

“A very large section of society has come to view stability as hopelessness. This is why the registration of Mikhail Prokhorov, nominated for the presidency by one group of voters, showed that a second round is not impossible,” said Mikhail Vinogradov, head of the St. Petersburg Policy Foundation.

“A short while ago, the Kremlin ruled out the very possibility of a second round,” the analyst said. “Of course, there are quite a few panic mongers in the ruling party who fear the South Ossetian scenario, where opposition leader Dzhioyeva won the election in the second round thanks to the protest vote. But the situation in Russia differs radically from that in South Ossetia.”

These developments have shed new light on the registration of opposition candidates. Apart from the “always second” Gennady Zyuganov and Vladimir Zhirinovsky, representatives of political groups who have never run before have now joined the presidential race.

Dmitry Medvedev’s rivals in 2008 were the same old Communist and LDPR leaders. Presidential candidate Andrei Bogdanov, leader of the Democratic Party and a Freemason, Grand Master of the Grand Lodge of Russia, did not put on a strong enough show to qualify as a sparring partner.

But this time new candidates have joined the race, increasing the probability of a second round. Each has a niche electorate, which could add up to 50% of the vote in round one.

Apart from Sergei Mironov, the moderate-left leader of A Just Russia who is being nominated by his parliamentary party, there are also several rightwing candidates.

This means that Putin will face a broad spectrum of opponents, from Communists and Liberals to nationalists and advocates of European integration.
It is indicative that the CEC and the opposition, which hates the Commission, were unanimous in rejecting radicals. The CEC has refused to register self-styled controversial author and National Bolshevik guru Eduard Limonov, as well as prolific anti-Semite Boris Mironov. At the same time, Yabloko rejected the proposal of Yevgenia Chirikova, leader of the Protect the Khimki Forest movement, to nominate blogger Alexei Navalny.

The CEC refused to register the National Bolsheviks and nationalists of all stripes for such reasons as incorrect paperwork and problems with their nominating groups. Nationalists now have a formal reason to claim that the authorities fear them.

“In fact, Russia has no ethnic or demographic policy, which is why the authorities react so nervously to any rivals in these areas,” explained Mark Urnov, academic supervisor of the Faculty of Politics at the Higher School of Economics.

Yabloko refused to nominate Navalny because of his nationalism, instead opting for its former leader, Yavlinsky.

On the other hand, Navalny could be prevented from participating in the elections even if Yabloko supported him. Only a parliamentary party can nominate candidates without collecting the required two million signatures. Furthermore, they must be collected in at least 40 Russian regions (with no more than 50,000 signatures accepted from each region), which is another formal reason for rejecting Navalny.

Russians will have the broadest choice of candidates in the first round since 1996. However, it is rumored that if a political crisis develops – all candidates, excluding Putin, may withdraw from the race.

But first, Zyuganov and Zhirinovsky have never ever let the Kremlin down but always “lost honorably.” And second, there are several possible stand-ins such as Siberian governor Dmitry Mezentsev, who hails from St. Petersburg, and the scandalous former Vladivostok mayor, Viktor Cherepkov. So if the “Europeans” fail, their place will be taken by “Asians” from Irkutsk and the Primorye Territory.