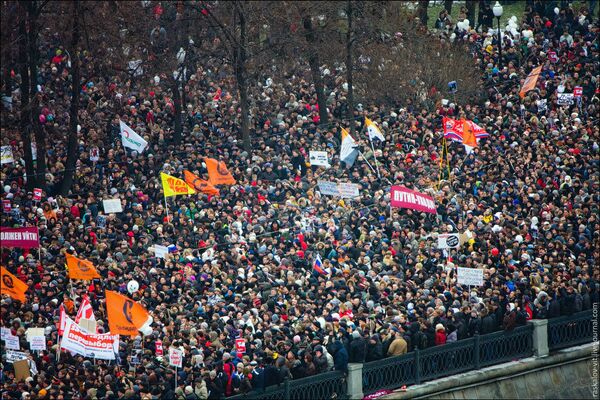 The march will take place on December 24 at downtown Moscow's Sakharov Avenue.

Opposition leader Vladimir Ryzhkov said on his Facebook page that the opposition’s task is to attract “no less than 300,000 people.”

Almost 19,000 people have so far registered for the For Fair Elections rally on the organizers' Facebook page.

The organizers of the protest campaign submitted three possible venues for the protest to City Hall: Sakharov Avenue, Vasilyevsky Spusk and Manezhnaya Square. The latter two are adjacent to the Kremlin.

“City Hall said that we are not allowed to stage a rally at Vasilyevsky Spusk and Manezhnaya Square because these sites had already been booked…We haven’t been told who has booked them,” the news web site Gazeta.ru quoted A Just Russia member Ilya Ponomarev as saying.

Earlier Matvei Dzen, a lawyer for the ROD-Russia nationalist movement, said in his blog that they had also requested all three sites for their own demonstration on December 24.

However, the Slavic Union head Dmitry Dyomushkin said that the city's officials had dismissed the nationalists' request.

A protest by the opposition Yabloko party against alleged election fraud was also authorized for December 17 and will take place at Bolotnaya Square, which saw the biggest anti-government protest in almost two decades last Saturday. About 10,000 people are expected to take part.

Last Saturday demonstrations against alleged electoral fraud in favor of the ruling United Russia also took place across the country, from the European exclave of Kaliningrad to Vladivostok on the Pacific coast. Some 7,000 people also rallied on Saturday in Russia’s second city of St. Petersburg.