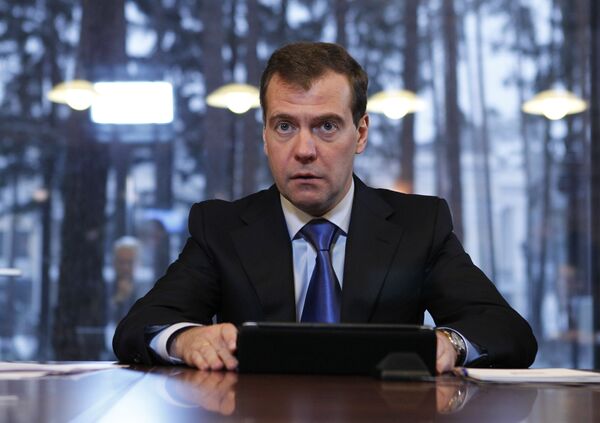 Russian President Dmitry Medvedev reiterated on Tuesday his pledge to carefully investigate all alleged violations in the December 4 parliamentary elections and take “fair decisions” based on probe results.

Russian President Dmitry Medvedev reiterated on Tuesday his pledge to carefully investigate all alleged violations in the December 4 parliamentary elections and take “fair decisions” based on probe results.

“Not everyone is happy with the results of the popular vote,” Medvedev told representatives of the four parliamentary parties at his Gorki residence near Moscow.

“This is a new situation [for us], but it cannot be otherwise. Election commissions and the pertinent judicial bodies will carefully consider all claims and lawsuits. If real violations are revealed, fair decisions should be made,” Medvedev said without elaborating.

A total of 117 claims over the alleged vote fraud were filed on election day alone, he added.

Russia has seen a wave of protests following the polls, in which the pro-Kremlin United Russia party, backed by Medvedev and Prime Minister Vladimir Putin, won almost half of the vote, retaining its majority in the lower house of Russia’s parliament, the State Duma.

The vote was marred by what both protesters and international observers have described as multiple violations, including ballot-stuffing and other fraud in favor of United Russia.

“We should make new political decisions, take more decisive steps to eliminate the existing restrictions on political activity,” he said, adding that this would help overcome what he described as a “gap between various social groups, as well as individual [political] institutions.”

He also said it was important that the opposition control a significant part of committees in the new State Duma.

United Russia controlled 26 committees out of 32 in the previous Duma.

The head of the Liberal Democrats (LDPR) parliamentary faction, Igor Lebedev, said last week that Untied Russia, which lost its super-majority in the parliamentary polls, was expected to control only half of the committees in the new State Duma.

He also said the number of committees in the new Duma may be cut to 28.

The deputy head of the Communist party in the State Duma, Sergei Reshulsky, confirmed that the new Duma would have a maximum of 28 committees.

The first session of the new Duma will take place on December 21, Medvedev said on Tuesday. The president said he would address the new parliament on December 22.