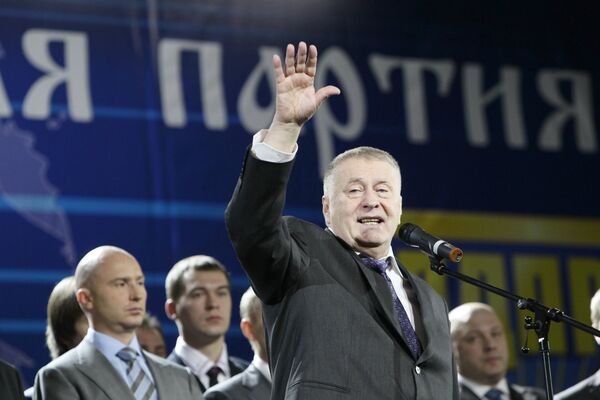 Russia's ultra-nationalist Liberal Democratic Party (LDPR) nominated on Tuesday its outspoken leader Vladimir Zhirinovsky as a candidate for the presidency.

Russia's ultra-nationalist Liberal Democratic Party (LDPR) nominated on Tuesday its outspoken leader Vladimir Zhirinovsky as a candidate for the presidency.

The LDPR Congress took place in Moscow on Tuesday, the main item on the agenda was its nomination of the party's presidential candidate. One hundred sixty-nin delegates voted for Zhirinovsky's nomination, nine delegates were against his nomination.

Zhirinovsky believes that the current political scenario in Russia could lead to a second round in presidential elections scheduled for March 4, 2012, and the victory of a “non-Kremlin” candidate.

"Now we should fight for victory. There is a chance [to win] because the entire West will now provoke a defeat of the Kremlin candidate,” Zhirinovsky said, hinting at current Prime Minister Vladimir Putin's presidential nomination from his United Russia party.

Zhirinovsky also said that he would insist on holding early parliamentary elections in March 2013, as the majority, according to him, is displeased with the results of December 4 State Duma elections, in which Putin’s ruling United Russia party barely maintained a parliamentary majority.