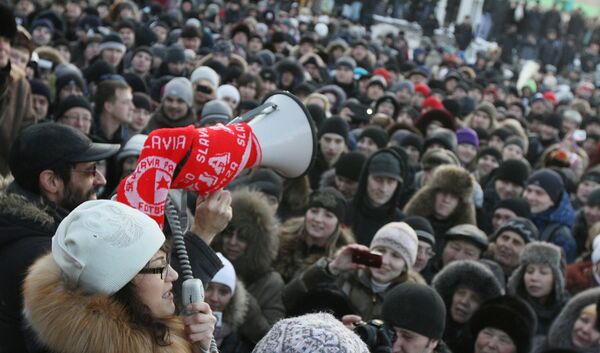 The largest sanctioned rally was held in Perm, a city in the Urals, which gathered some 800 people instead of 300 permitted by the police.  Two people were detained.

About 300 protesters gathered for an unsanctioned rally on a central square in Omsk (west Siberia), which yesterday saw a 1,000-people strong rally.

Only 120-150 people came to protest against poll results in Russia's third largest city, Novosibirsk, where more than 3,500 rallied on Saturday.

Police reported that all rallies were peaceful and did not last long.

Meanwhile, activists in the town of Apatity in the northern Murmansk Region decided to stage an unusual toy rally since they failed to gain permission from authorities.

Toys from Kinder Surprise chocolate egg with slogans attached to toothpicks were acting as protesters in Apatity. According to organizers, who called the event “a nano rally”, such demonstrators could not be dispersed but are likely to attract public attention.

Demonstrations against alleged electoral fraud in favor of the ruling United Russia took place on December 10 across the country, from the European exclave of Kaliningrad to Vladivostok on the Pacific coast. Organizers say they the protests may continue next weekend and probably on December 24-25.

United Russia saw its share of the vote fall sharply in the December 4 polls, although it just managed to hang onto its parliamentary majority. But opposition activists claim the party's real figures were much lower.

The largest rallies to demand a rerun of last weekend's parliamentary polls and vent anger at Prime Minister Vladimir Putin and his United Russia party were held in Moscow (at least 20,000 participants) and St. Petersburg (7,000).