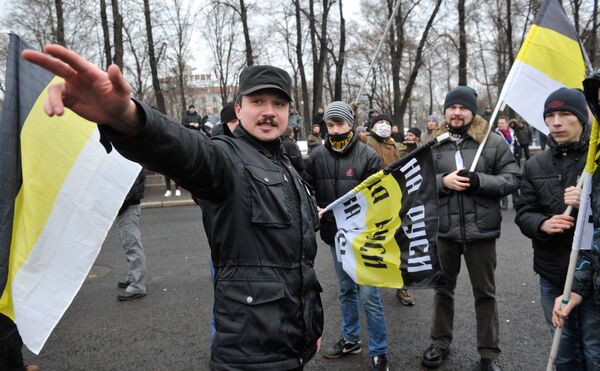 Russian nationalist movements gathered on Sunday for an authorized rally in the center of Moscow.

Russian nationalist movements gathered on Sunday for an authorized rally in the center of Moscow.

Most of the 250 nationalists who came to the rally on Bolotnaya Square - the site of a massive protest on Saturday against alleged electoral fraud at last week's parliamentary polls - were young people with scarves and medical masks hiding their faces. The rally participants were holding imperial flags. The square was sealed off by the police.

"The event started at 2:00 p.m. Moscow time (10:00 GMT) and is being attended by 300 people, of whom about 50 are media representatives covering the event," the Moscow police press service said.

A year ago, a rally to mark the fatal shooting of Spartak Moscow fan Yegor Sviridov turned violent in the center of Moscow after 5,000 football fans and nationalists went on a rampage and called for the death of Russia's migrant population.

A small nationalist picket was held earlier on Sunday in Pushkinskaya Square in Moscow. The organizers were collecting signatures for the bill on the rights of the Russian people. The picket, which was authorized by the City Hall, lasted about 40 minutes.

On Saturday, tens of thousands of people streamed into Bolotnaya Square in central Moscow to demand a rerun of last weekend's parliamentary polls and vent their anger at Prime Minister Putin and his United Russia party.

Demonstrations against alleged electoral fraud in favor of the pro-Kremlin United Russia took place across the country on Saturday, from the European exclave of Kaliningrad to Vladivostok on the Pacific coast. Some 7,000 people rallied in Russia's second city of St. Petersburg, police said.

But by far the biggest show of dissent took place in Moscow, where police said around 25,000 people gathered peacefully in driving sleet at Bolotnaya Square, a short walk from the Kremlin. Organizers put the crowd at nearer to 40,000. There were no arrests, police said.