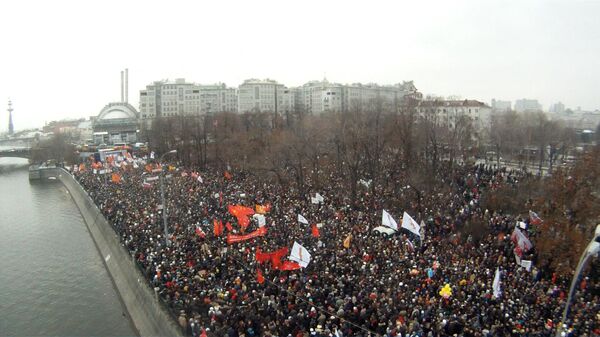 © RIA Novosti
Subscribe
International
India
Africa
Tens of thousands of people streamed into central Moscow on Saturday to demand a rerun of last weekend’s parliamentary polls and vent their anger at Prime Minister Vladimir Putin and his United Russia party.

Tens of thousands of people streamed into central Moscow on Saturday to demand a rerun of last weekend’s parliamentary polls and vent their anger at Prime Minister Vladimir Putin and his United Russia party.

Demonstrations against alleged electoral fraud in favor of the ruling United Russia took place across the country, from the European exclave of Kaliningrad to Vladivostok on the Pacific coast. Some 7,000 people rallied in Russia’s second city of St. Petersburg, police said.

But by far the biggest show of dissent took place in Moscow, where police said around 25,000 people gathered peacefully in driving sleet at Bolotnaya Square, a short walk from the Kremlin. Organizers put the crowd at nearer to 40,000. There were no arrests, police said.

Demonstrators shouted ‘Putin out!” and “Putin is a thief!” and also “Give us back our elections!”

United Russia saw its share of the vote fall sharply in the December 4 polls, although it just managed to hang onto its parliamentary majority. But opposition activists claim the party’s real figures were much lower.

The Organization for Security and Cooperation in Europe said the election was marked by a “lack of fairness” and “slanted” in favor of United Russia. The Russian electoral commission has said the vote was fair and valid, though President Dmitry Medvedev has said accusations of cheating must be investigated.

“We demand new elections because what happened on December 4 was a falsification,” opposition activist Yevgeniya Chirikova told the crowd, before leading them in a sustained chant of “Thieves and Swindlers!” a reference to United Russia’s popular, unofficial nickname.

The man who created that moniker, influential blogger and anti-graft campaigner Alexei Navalny, was on Tuesday sentenced to 15 days imprisonment for his part in a protest earlier this week. One of the biggest cheers of the day met the reading of a letter he had written from behind bars.

‘To struggle for freedom is sweet,” Navalny’s letter said. “Every one of us has the most powerful and only weapon we need - a sense of our own worthiness.”

Navalny also accused Putin and United Russia of manipulating voters into believing that the price for stability and economic growth was “to live like mute cattle.”

“They fed us that for 12 years,” his letter went on. “And we are sick of it. We are not slaves and we are not cattle. It’s time to wake up from our slumber!”

Protesters appeared to come from all walks of life, with groups of teenagers mingling with pensioners and young families.

“I’m 53 years old, and this is the first time I’ve been on a protest,” lawyer Sergei Levin said. “I’m not sure what’s going to happen next – but we have to change something.”

“We’re all fed up with Putin and United Russia,” said a Moscow student who only gave his name as Ruslan. “But the most important thing we will take from this rally is that we all know now we are not alone.”

“There is no doubt that people protesting against the result of the vote or against the way it was handled have a right to do this,” Isayev said. But he also urged the demonstrators not to “become pawns in the hand of those who would destroy our country.”

Putin on Thursday accused the United States of supporting the protests and giving an encouraging “signal” to opposition leaders.

Putin had also warned that police would crack down on illegal demonstrations and there was a heavy security presence around both Bolotnaya Square and at the more central Revolution Square, where the protest was originally set to go ahead.

But there were no reports of trouble and a soft-handed police force – including large numbers of the notorious Omon riot squad – even allowed a group of several hundred radical activists led by writer and opposition firebrand Eduard Limonov to go ahead with an illegal protest.

The tactics were a marked change from the handling of demonstrations earlier in the week, in which police detained some 1,000 people across the country, and from the way riot police have unceremoniously snuffed out political protests in past years.

In another striking change, state-run television networks which had largely ignored earlier poll protests gave significant airtime to the rallies on Saturday.

The main Channel One evening news broadcast led with the Moscow demonstration, even if its coverage was upbeat and made no mention of sentiments critical of Putin or United Russia that were voiced at the protests.

Opposition leader Vladimir Ryzhkov called for a new rally on December 24, if the Kremlin refuses to call new elections.

“People have woken up,” demonstrator Irina Popova said as the Moscow rally came to an end.

“In the past, one or two thousand people turned up to protest rallies, but just look at how many people there are here today. A lot of people have come to a demonstration for the first time – and not the last, I guess.”