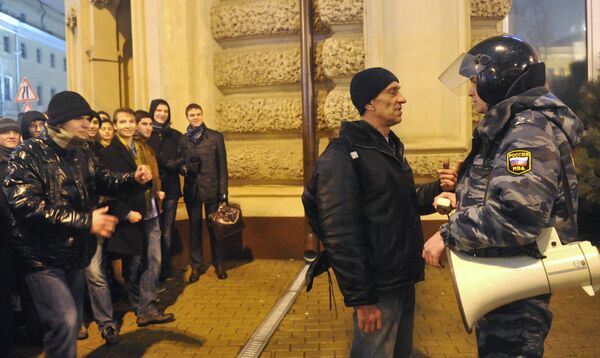 © RIA Novosti . Aleksandr Utkin
/
Go to the photo bank
Subscribe
Public anger over alleged electoral fraud in favor of Prime Minister Vladimir Putin’s party is expected to bring thousands out onto the streets of Russia on Saturday in the largest demonstrations here for almost two decades.

Public anger over alleged electoral fraud in favor of Prime Minister Vladimir Putin’s party is expected to bring thousands out onto the streets of Russia on Saturday in the largest demonstrations here for almost two decades.

"Now is the time to unite...we are demanding new elections," prominent opposition activist Yevgeniya Chirikova said in an Internet video address on the eve of the rallies.

Protests – both sanctioned and unsanctioned by the authorities - are planned for scores of Russian cities and towns, from the European exclave of Kaliningrad to Vladivostok on the Pacific coast.

But the biggest demonstration is to take place in Moscow, where city authorities have given permission for a 30,000-strong rally at Bolotnaya Square, across the Moskva river from the Kremlin.

The Moscow demonstration was originally set to go ahead at the much smaller – although far more central - Revolution Square. A number of opposition groups have vowed to rally there regardless of the decision to relocate the protest, raising the specter of clashes with police. Putin warned earlier in the week that police would crack down on illegal demonstrations.

Putin also accused the United States of being behind the protests, saying that criticism of last Sunday’s parliamentary polls by Secretary of State Hillary Clinton "set the tone for some opposition activists" and also "gave them a signal."

"People in our country don't want the situation in Russia to develop like it did in Kyrgyzstan and, not so long ago, in Ukraine," Putin also said. "Nobody wants chaos."

While the polls were a blow to Putin’s United Russia party, it just managed to hang onto its parliamentary majority. But allegations have since surfaced – included dozens of video clips uploaded onto the Internet – of ballot-stuffing and other electoral procedure violations. President Dmitry Medvedev has said the claims of fraud will be investigated.

Disgruntlement over the polls saw some 5,000 protesters rally in central Moscow on Monday. Demonstrations continued across Russia, although on a smaller scale, for the next two evenings. Some 1,000 people have so far been arrested in protests, police said, including influential blogger and opposition activist Alexei Navalny. It was Navalny who coined United Russia’s popular, unofficial nickname – “The Party of Swindlers and Thieves.”

Navalny, along with another opposition leader, Ilya Yashin, was jailed for 15 days on Tuesday.

The protests have been largely ignored by state-run televisions channels, which chose instead to broadcast images of United Russia supporters parading near the Kremlin. Demonstrations have been organized via Facebook and Vkontakte, a popular Internet social networking site. Vkontakte’s founder, Pavel Durov, said this week he had refused a request by the security services to deactivate accounts belonging to opposition groups.

Russia’s chief doctor, Gennady Onishchenko, urged Russians on Friday not to attend the demonstrations, saying the “cold weather” and the “large groups of people” meant they would be in danger of contracting influenza.