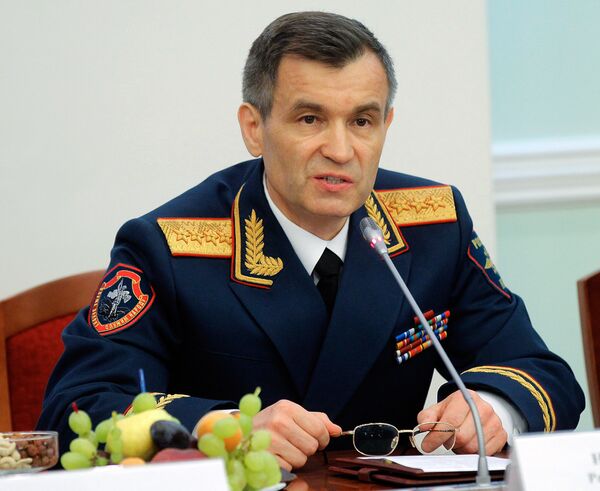 Russian Interior Minister Rashid Nurgaliyev dismissed on Thursday a proposal put forward by a senior subordinate to introduce “face control” on the internet.

Russian Interior Minister Rashid Nurgaliyev dismissed on Thursday a proposal put forward by a senior subordinate to introduce “face control” on the internet.

“This is nonsense, and no one is going to introduce this,” Rashid Nurgaliyev when asked to comment on the proposal put forward by the head of the Interior Ministry’s Bureau for Special Technical Services, Alexei Moshkov.

Moshkov proposed obliging internet users to identify themselves by their real names and publish their actual street addresses on their online accounts.

“If you are a fair and law abiding person, what is the point for you to hide?” Moshkov said in an interview with government daily Rossiiskaya Gazeta published on Thursday. “I would like to remind you that there is no censorship on the internet, and the Interior Ministry’s ‘K’ department [in charge of cybercrimes] will not seek and arrest anyone for criticism.”

Such a measure, he said, would however help fight online “fraudsters, blackmailers and racketeers,” as well as hackers and child abusers, who have managed to avoid punishment by hiding behind nicknames.

“We can state with regret that general crime has penetrated into the limitless information and telecommunication sphere and has flourished there,” he added.

He also pointed to last year’s race-hate riots in downtown Moscow, saying that they were a result of “extremist slogans” having been spread through social networks.

Moshkov’s interview, published amid growing protests against the results of Sunday parliamentary elections, sparked a wave of criticism from Russian internet users, who accused the Russian authorities of attempting to restrict internet freedom.

The Sunday vote, in which the pro-Kremlin United Russia party retained its majority in parliament, has been marred by allegations of widespread procedural violations and fraud. Numerous videos of what appeared to be ballot-staffing and other irregularities at polling stations have been published on the internet following the polls.

The Russian authorities have declared the vote fair and democratic despite the reported violations, which President Dmitry Medvedev has ordered investigated.