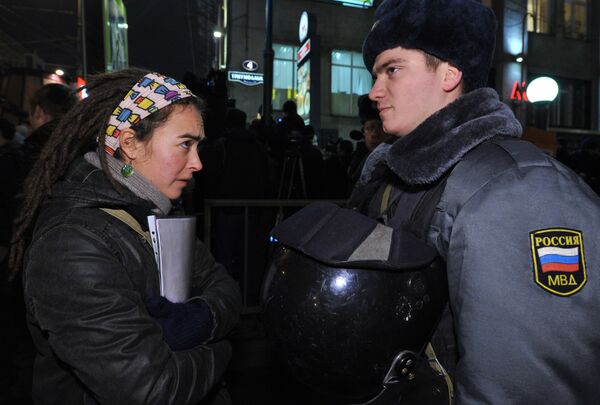 Demonstrations against alleged electoral fraud in favor of Prime Minister Vladimir Putin’s United Russia party continued for a third night on Wednesday, with arrests in both Moscow and St. Petersburg, police said.

Some 500 people rallied in downtown St. Petersburg, where police said 70 people had been detained.

A much smaller protest took place in Moscow, where some 20 people were arrested for trying to organize an illegal protest, a police spokesperson told RIA Novosti. The protest drew around 30 people, plus dozens of journalists.

A protest rally was also reported in Russia's western exclave of Kaliningrad, which police said was attended by 150 people. The organizers said the figure was closer to 1,000.

Some 20,000 people have so far indicated on social network sites that they will attend a sanctioned protest on Saturday at central Moscow’s Revolution Square.

But the Moscow-based New Times magazine reported on Wednesday, citing a source in the city administration, that the square would be closed for “repairs” before Saturday.

The largest protest against alleged poll violations at Sunday’s parliamentary elections came on Monday, when a crowd of some 5,000 rallied in central Moscow.

Some 1,000 people have been arrested in poll protests since Sunday, police said.

Dozens of video clips appearing to show election fraud at the polls have so far been uploaded onto the Internet.

President Dmitry Medvedev, meeting the election commission chief outside Moscow on Tuesday, said charges of voting violations must be investigated. But he added that video material posted on social networks did not constitute “incontestable” proof of cheating.

International observers and the United States also criticized the elections, which saw United Russia's worst ever nationwide performance. The party did, however, manage to hang onto its majority.