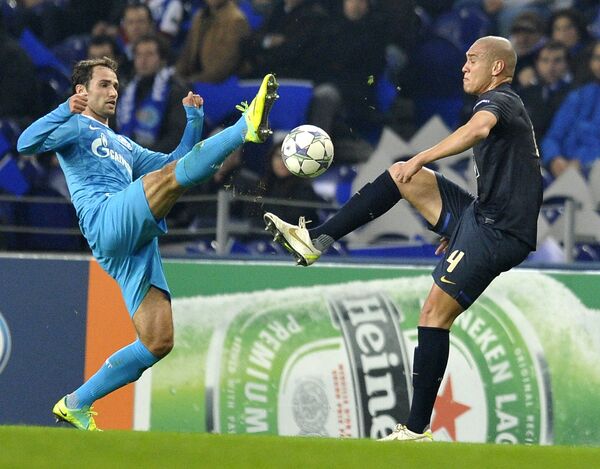 © RIA Novosti . Alexey Kudenko
/
Go to the photo bank
Subscribe
Zenit St. Petersburg qualified for the knockout stages of the Champions League late on Tuesday after grinding out a 0-0 draw in Porto.

Zenit St. Petersburg qualified for the knockout stages of the Champions League late on Tuesday after grinding out a 0-0 draw in Porto.

The point gives Zenit the second qualification berth from Group G behind surprise package APOEL Nicosia, and leaves Porto hoping for passage into the Europa League.

Zenit turned up for the single point they needed to qualify, displaying no attacking threat and with Portuguese playmaker Danny seemingly overawed by the hostile reception from his compatriots in the crowd.

The visitors' goal was besieged with varying degrees of intensity for most of the match by Porto and Brazilian forward Hulk in particular.

Ultimately, his sloppiness in front of goal, combined with a sterling display in goal from Vyachelsav Malafeyev and the destructive influence of Igor Denisov in midfield kept the hosts at bay.

Malafeyev got down fast to his right to deflect away an early shot by Djalma, who caught Domenico Criscito napping at left back.

Hulk headed straight at Malafeyev moments later, and then powered a shot from a sharp angle that the Zenit goalkeeper could only pad away for a corner.

The 25-year-old Brazilian tried to walk the ball into the net on 20 minutes but was overwhelmed by Zenit defenders, before slamming a 35-yard free kick at goal that Malafeyev gathered at the second attempt.

Hulk popped up on the right to try and catch Malafeyev out at his near post with a low drive, but he was equal to it.

Zenit almost created something a minute before half time as Portuguese forward Danny tried to play a one-two with Victor Faizulin, but the Russian's return was blocked.

After the break, Hulk skipped around Tomas Hubocan to go clean through down the right, but toe-poked across goal and out for a goal kick.

James Rodriguez then picked up the ball in a central position outside the area and fizzed a left-footed shot just wide of the right-hand post.

On the hour mark, a speculative cross found its way to Alvaro Pereira, unmarked at Zenit's back post, but the Uruguayan skewed wide.

Malafeyev then dived to his left to claw away a curling effort from Joao Moutinho.

Aleksandr Anyukov blasted over to end a rare counterattack from the visitors on 70 minutes.

Soon after, Moutinho slid in to seize the ball from Criscito down the right, burst through but crossed straight into Malafeyev's arms.

The Zenit stopper then produced his save of the match, rushing out to charge down a close-range volley from Rodriguez.

Porto committed men forward late on but were thwarted at every turn, leaving the Russians celebrating their passage to the knockout rounds.