Russian election protesters given 15 days behind bars in Moscow 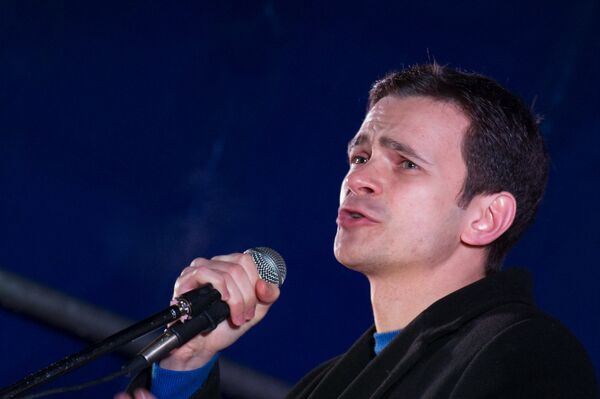 Navalny and Yashin were sentenced to 15 days behind bars by a court the day after taking part in a 5,000-strong rally triggered by claims of massive vote rigging in favor of the ruling party at Sunday’s elections.

A total of 300 protesters were detained during the rally. Police moved against the rally after Yashin urged protesters to move towards the Kremlin.

With nearly 100 percent of ballots in the State Duma election counted, the ruling United Russia party has nearly 50 percent of the vote, the Communist Party, 19.2 percent, A Just Russia 13.25 percent and the Liberal Democrats 12 percent.

Opponents of United Russia claim the elections to the lower house of parliament were marred by massive fraud that resulted in excessive support showings for the ruling party. They have backed their accusations with videos, most shot on mobile phones and posted on websites and they claim these prove large-scale wrongdoing throughout the vote.

Party supporters have acknowledged there were irregularities by “over-zealous” supporters but not in sufficient numbers to have made any meaningful difference to the outcome and have asserted that the election was fair overall.

Meanwhile, President Dmitry Medvedev said on Tuesday that complaints of vote irregularities need to be investigated but videos purporting to show fraud are not incontestable proof of cheating.

“It is wrong to draw conclusions about whether the elections were clean or dirty on the basis of such evidence,” Medvedev stated. “This is not entirely fair.”

After the sentence was declared for Yashin, the opposition activist said protests will continue.

“All those sentences will only make people even more indignant. These authorities will have to leave sooner or later as they are acting illegitimately,” Yashin said, while his defense said the Tverskoi Court will consider an appeal on his 15-day jail term on Wednesday.