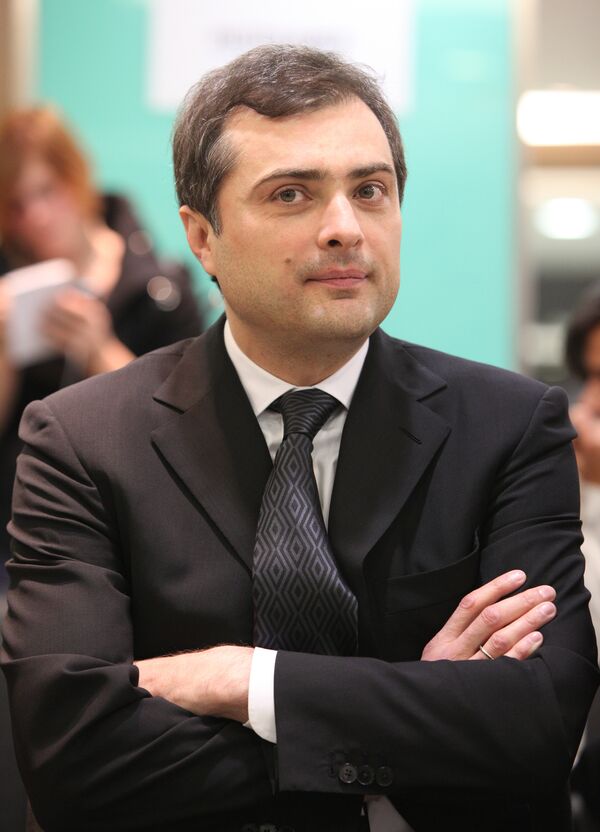 © RIA Novosti . Ekaterina Chesnokova
/
Go to the photo bank
Subscribe
Vladislav Surkov, a senior Kremlin official and one of Russia’s chief domestic politics masterminds, has backed the creation of a “popular liberal party” in Russia.

Vladislav Surkov, a senior Kremlin official and one of Russia’s chief domestic politics masterminds, has backed the creation of a “popular liberal party” in Russia.

Asked by a popular radio host Sergei Minayev about what the Russian political system lacks, the first deputy head of the Russian presidential administration replied: “A popular liberal party. Or, rather, a party of disgruntled urban communities.”

Minayev posted his interview with Surkov on his LiveJournal blog late evening Monday, just as police detained 300 people at a 5,000-strong Moscow rally protesting against alleged vote-rigging in the Sunday parliamentary elections.

Unlike United Russia which has enjoyed a constitutional majority in previous State Dumas, Yabloko failed to pass the 7-percent entry threshold for the lower chamber in the previous two Duma votes, in 2003 and 2007.

Commenting on the results of Sunday's polls in which all seven registered Russian parties participated, Surkov admitted that the Russian political system lacked “new players.” Meanwhile, the Justice Ministry has consistently torpedoed attempts to register new parties over the past few years, allowing only mergers of existing ones.

Political analysts were divided over whether a new liberal party could gain prominence in Russia.

“The election results have clearly shown that liberals are not popular in Russia,” Sergei Mikheyev, head of the Moscow-based Center for Political Assessments think tank, said. “How can you create a liberal party if people do not vote for the liberals? Are those unhappy with the authorities necessarily liberals?”

Sergei Markov, political scientist and United Russia member, disagreed, saying there is already social demand for such a party in Russia's big cities but it has yet to mature into political action.

“Our urban middle class is growing,” he said. “These elections have shown that they have established themselves as a social group, but not yet as a political group.”

Other parties that were represented in the parliament, the Communists, the Liberal Democrats and A Just Russia, also scored better in big cities than they did nationwide, which suggests the urban vote was rather against United Russia than for the liberal Yabloko.

Those who want Russia to pursue a European path should be given a “political choice,” Markov said.

Both Mikheyev and Markov agreed that the Yabloko party could become a basis for liberal-minded Russians to join their forces.

“Yabloko could become the core of such a Europe-oriented party,” Markov said, adding that the party “has the right balance of liberal and social ideas and a pro-European ideology.”

One of the post-Soviet Russia’s oldest parties, Yabloko, led by Sergei Mitrokhin and Grigory Yavlinsky, is much more popular among representatives of the Russian diaspora in the West, the elections showed. The party led the polls in the United States and European countries such as Britain, Germany, France, Finland, the Netherlands and Switzerland.