New parliament will be ‘lively’ - Medvedev 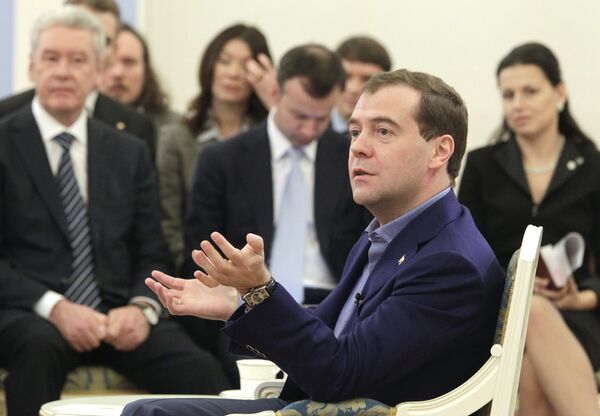 The new-look State Duma that emerged after the weekend’s parliamentary polls will be more conducive to energetic debate, President Dmitry Medvedev said on Monday.

The new-look State Duma that emerged after the weekend’s parliamentary polls will be more conducive to energetic debate, President Dmitry Medvedev said on Monday.

The ruling United Russia party just retained a majority in Sunday’s elections, winning 238 of 450 seats, a significant decline from the 315 seats it claimed four years ago.

The second-placed Communist Party won 92 seats, a some 30% increase from 2007. The nationalistic Liberal Democratic Party (LDPR) and the A Just Russia party also saw their share of the vote increase.

“I am pleased that we will have a livelier parliament,” Medvedev said. “We all realize that the truth is only born out of debate, and that no one has a monopoly over the truth,” he said.

Medvedev, who headed United Russia’s ticket at the polls and may head the new government after he steps down in March, dismissed widespread allegation of electoral fraud in favor of United Russia and said the voting was “absolutely honest, fair and democratic.”

He also reaffirmed that United Russia is ready to form blocs and coalitions in the new Duma.

In other comments, Medvedev also suggested that United Russia conventions were reminiscent of Soviet-era Communist Party congresses and needed to be “livelier.”

He also said that he was not opposed to the return of the “against all” option on ballot papers, which was scrapped in 2006.