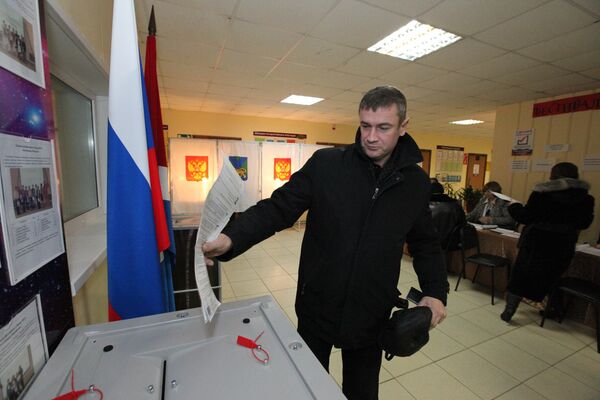 Despite the lack of a level playing field, Russian voters made use of their right to express their choice in parliamentary elections, observers from the Organization for Security and Co-operation in Europe (OSCE) said on Monday.

Despite the lack of a level playing field, Russian voters made use of their right to express their choice in parliamentary elections, observers from the Organization for Security and Co-operation in Europe (OSCE) said on Monday.

The governing United Russia party won 238 of 450 seats in Sunday’s elections to the State Duma, the lower house of parliament, a significant drop compared to the 315 seats it won in the 2007 elections.

OSCE observers noted that the preparations for the elections were technically “well-administered across a vast territory,” but marked by “a convergence of the state and the governing party,” limited political competition and a lack of fairness.

The contest was slanted in favor of the ruling party: the election administration lacked independence, most media were partial and state authorities interfered unduly at different levels, the organization said.

The count was characterized by frequent procedural violations and instances of apparent manipulations, including serious indications of ballot box stuffing.

“Yesterday’s elections proved that the Russian people can form the future of this country by expressing their will despite many obstacles,” said Petros Efthymiou, head of the OSCE Parliamentary Assembly delegation.

“However, changes are needed for the will of the people to be respected. I particularly noticed the interference of the state in all levels of political life, the lack of necessary conditions for a fair competition and no independence of the media.”

“Any election needs an impartial referee - and until now, it has not had one. This needs to change,” said Tiny Kox, head of the delegation of the Council of Europe’s Parliamentary Assembly.

“These elections were like a game in which only some players are allowed on the pitch, and then the field is tilted in favor of one of the players,” said Ambassador Heidi Tagliavini, head of the Election Observation Mission of the OSCE Office for Democratic Institutions and Human Rights.

With votes from about 95 percent of polling stations counted, the ruling United Russia party is now slightly below the 50-percent mark with 49.67 percent, a far cry from the commanding two-thirds constitutional majority the party held in the State Duma for the past four years, according to the official count.

The other three parties that passed the 7-percent threshold will receive more seats than in 2007. The Russian Communist Party (KPRF) came in second, taking 92 seats (35 more seats than in 2007), the Liberal Democratic Party (LDPR) won 56 seats (16 more) and A Just Russia will have 64 deputies in the Duma (26 more).

The results of the polls have already sparked a wave of strong criticism from the Internet users citing massive fraud and violations.