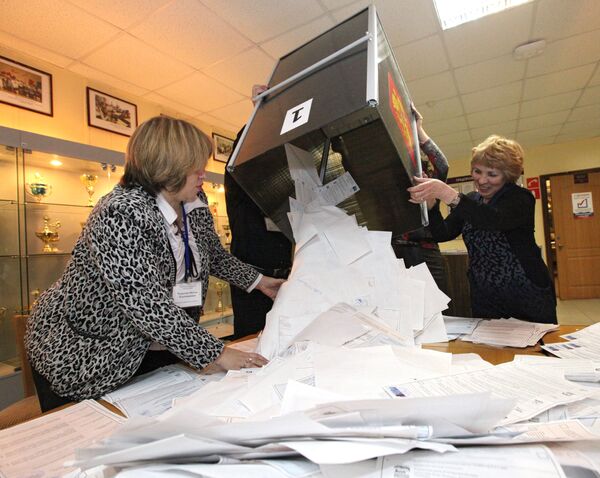 Parties competing for representation in the State Duma elections have complained of "tons of violations" during the Sunday polls, including illegal campaigning, vote fraud and even threats to observers.

Parties competing for representation in the State Duma elections have complained of "tons of violations" during the Sunday polls, including illegal campaigning, vote fraud and even threats to observers.

The A Just Russia, Yabloko and Communist parties complained of the so-called carousels, multiple voting when people with temporary registration and absentee ballots travel by buses from one polling station to another to cast votes.

"The bus 'carousel' is the dirtiest trick, which can be seen in almost all the regions," Vladimir Kashin, deputy head of the Communist Party's executive committee, told RIA Novosti. Kashin said that Communists and activists from other parties blocked 12 buses, which brought young voters, in the Vladimir Region (Central Russia) on Sunday morning.

Polls opened on the Kamchatka Peninsula in Russia's Far East at 8 a.m. local time Sunday (20:00 GMT Saturday) and close at 8 p.m. local time (17:00 GMT) in the western exclave of Kaliningrad. Russians voted Sunday to elect the State Duma, the lower chamber of the parliament, in what is widely regarded as a test of the public trust into Prime Minister Vladimir Putin after 12 years of leading the country. Putin's United Russia party is set to win a majority in the future Duma but it is expected to demonstrate poorer performance than in the previous vote in 2007.

"The polls turned into a game 'Catch a fraudster," Mitrokhin said, adding that his party had already forwarded 40 complaints to the Central Election Commission.

Another popular complaint concerns attempts to obstruct the work of party observers at polling stations and to ban footage of the elections.

"We are getting reports from many regions that video footage is banned to observers, that they are not given access to ballot boxes, not allowed to monitor the sealing of boxes and groundlessly removed from polling stations," the Yabloko party's press service said.

The Liberal Democratic Party of Russia (LDPR) also complained of numerous attempts to hamper the work of observers and even threats.

"Ballot boxes are being sealed with violations and heads of [election] commissions threaten to remove LDPR observers from polling stations if they forward complaints of violations during the voting process," a spokesman for the party's press service told RIA Novosti.

According to him, an LDPR representative was beaten by policemen at a polling station in Yessentuki in the Stavropol Territory, South Russia.

The party says the Stavropol Territory is leading in the number of violations. Meanwhile, a nurse filled in the ballot papers in a hospital in the Chelyabinsk Region (Urals) for patients.

Patriots of Russia complained of the excessive number of ballot papers, while the Right Cause said deceased people were on the voting lists and attempts to bribe voters were fixed at some polling stations.

Meanwhile, several prominent Russian bloggers, independent media organizations and a major independent election watchdog, Golos, have turned their LiveJournal, Twitter and Facebook blogs into aggregators of the complaints filed by hundreds of volunteers observing elections all over Russia.

Golos reported at a news conference on Sunday evening that it has received more than 2,000 complaints. The most typical complaints are about attempts to block the work of independent observers, to break their photo and video cameras and refusals to let them join the mobile polling groups serving elderly and handicapped people.

The ruling United Russia party, which is expected to fare poorer than it did in 2007, accused its opposition rivals of illegal campaigning.

According to United Russia observers, the Communist Party, which is considered their main rival in the elections, accounts for the largest number of violations.

Ruslan Gattarov, the head of the United Russia violation monitoring group, told reporters that beefy young men "approached voters at some polling stations and ordered voters to vote for the Communist Party threatening them with violence."

Meanwhile, the Central Election Commission said it has received 68 complaints, including 45 complaints from political parties, as of 4.00 p.m. Moscow time (noon GMT).

"There are no serious violations and crimes which could affect the outcome of of elections," he said.

Igor Borisov, the head of the Russian Public Institute of Election Law, said almost 90% of international observers assess the organization of polls in Russia as "very good." Borisov observed the elections from the CEC premises.

A total of 688 observers from 54 countries are monitoring the Russian parliamentary elections.

George Kline Preston, an attorney and the executive head of the Nashville-based Institute of Progress through Law, who monitors the polling stations in the northern districts of Moscow, said that the procedure was well-organized. "There are even medical help points at the stations," he said.

"In the United States we do not have the Day of Silence ahead of the polls, so when you come to the polling stations there are party campaigners handing out the materials, something that you cannot see here in Russia," Preston said.