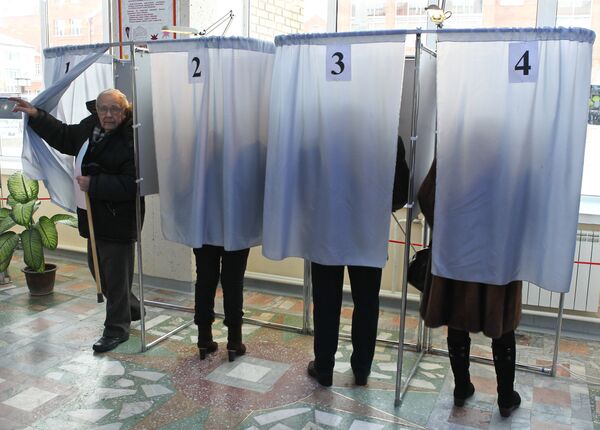 International observers monitoring Russia's parliamentary elections seen as a crucial test for Prime Minister Vladimir Putin and his ruling United Russia party, said on Sunday they registered no violations during the voting.

"The group of observers linked to the network of non-governmental organizations, including deputies of European parliament, national parliaments, experts and political scientists, has visited 48 polling stations in several Russian regions and so far our colleagues have no critical remarks, and everyone says that the process is very transparent," said Mateusz Piskorski, an observer from Poland.

Piskorski, who is also head of the European Center of Geopolitical Analysis, said that no one obstructed the work of observers.

"They are communicating with members of electoral commissions at polling stations, with internal national observers and have not registered any violations and plan to visit more electoral districts," he said.

The Central Election Commission announced that as of 10:00 a.m. Moscow time (07:00 GMT) the overall voter turnout at the parliamentary elections in Russia totaled 5% or 0.1% more than during the 2007 polls.

More than 1.7 million Russian citizens out of some 110 million eligible Russian voters have been issued absentee ballots to vote in the 2011 parliamentary election, the Central Election Commission said.

"Tentatively, we say that over 1.7 million absentee ballots have been issued," said Sergei Danilenko, member of the Central Election Commission.

Seven political parties are competing for representation in the Duma election but public opinion polls suggest that only four of them, United Russia, A Just Russia, the Communists and the Liberal Democratic Party, are expected to win enough support to get seats in the State Duma.

The 59-year-old Putin, who served two terms as president between 2000 and 2008, was nominated last month by United Russia as its candidate for presidential elections next March which he is widely regarded as almost certain to win regardless of the party's performance in Sunday's Duma vote.

Last month, he repeatedly called for United Russia to retain a majority in the Duma to facilitate smooth passage of government initiatives through parliament in view of current global economic turmoil.