Russia observes ‘day of silence’ ahead of general election 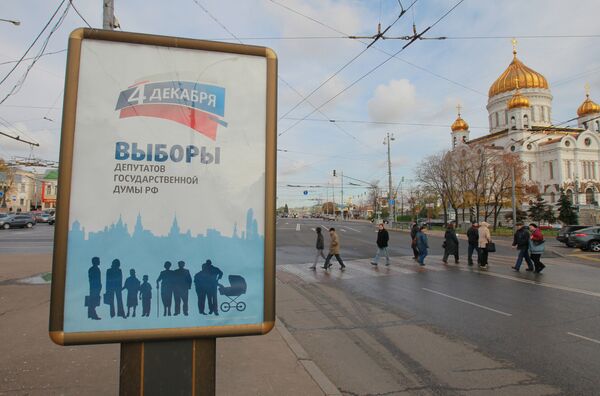 A national “day of silence” kicked off at midnight on Saturday in Russia prior to parliamentary elections on December 4.

A national “day of silence” kicked off at midnight on Saturday in Russia prior to parliamentary elections on December 4.

An election silence period is in effect to prevent any pressure on voters ahead of Sunday polls. During this period no active campaigning by the candidates, or polling, or political advertisement in the media are allowed.

All of Russia’s seven registered political parties will take part in Sunday’s elections. President Dmitry Medvedev will lead the ticket of the pro-Kremlin United Russia party, which has dominated the parliament.

Four parties – United Russia, the Communist party, the ultranationalist LDPR, and A Just Russia – are currently represented in the parliament. The other three – Yabloko, the Right Cause and Patriots of Russia – will strive to pass the seven-percent threshold to make it into the State Duma for the first time.

Meanwhile, Russia is all set for elections with the first polling stations opening at 8:00 a.m. local time on Sunday in Kamchatka and Chukotka regions in Russia’s Far East.

Around 96,000 polling booths have been set up across the country.

Exit poll results will only be made public after the last ballots are cast in western Russia.