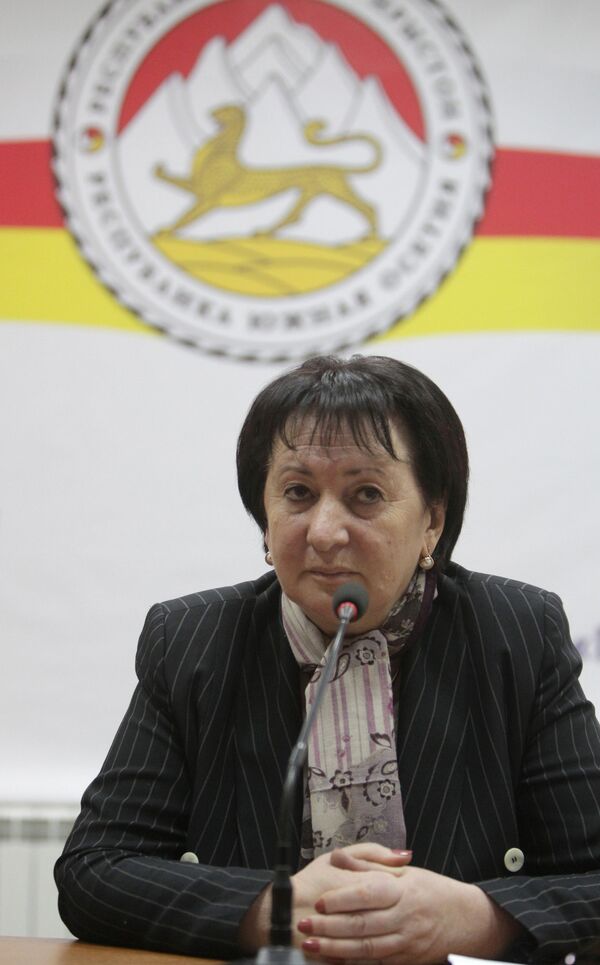 An ex-candidate in the South Ossetian presidential elections, Alla Dzhioyeva, who claims to have won Sunday's runoff vote, has filed a complaint over the Supreme Court’s decision to annul the election results.

An ex-candidate in the South Ossetian presidential elections, Alla Dzhioyeva, who claims to have won Sunday's runoff vote, has filed a complaint over the Supreme Court’s decision to annul the election results.

Dzhioyeva also urged outgoing President Eduard Kokoity to cancel the Supreme Court’s decision. She pledged to stop mass protests and ensure security for Kokoity in exchange for the cancelation of the court’s ruling.

“He said he needed some time for consultations,” Dzhioyeva said after a meeting with Kokoity.

The former Georgian republic of South Ossetia’s Supreme Court on Tuesday declared null and void the outcome of the November 27 runoff presidential elections because of violations. However Dzhioyeva, who had allegedly won the runoff, declared herself president of the breakaway republic in defiance of a court ruling and was later barred from running in a second election slated for March 25.

She urged Russia to recognize the results of the elections.

The Russian Foreign Ministry in response recognized the the annulment of the polls, calling on all South Ossetian political forces to respect the Supreme Court’s decision.

The ministry also said that Russia would not interfere into South Ossetia’s domestic affairs.

"The republic's leadership will make no concessions and will not yield to pressure," Kokoity said. "I call on everyone to come to their senses and make serious conclusions."

He also said that Alla Dzhioyeva's attempt to declare herself president and create a government council was illegal and violated South Ossetia's laws.

Kokoity said he ordered that there be no use of force against law-abiding protestors in Tskhinvali, but his press conference was interrupted by the sounds of gunfire.

A government source said the country's security services fired shots in the air as Dzhioyeva's supporters tried to force their way into the Central Election Commission headquarters.

According to the latest figures, between 700 and 1,000 people are rallying in the main square of Tskhinvali. No injuries were reported among the protestors.

Both Dzhioyeva and the region's Emergencies Minister Anatoly Bibilov, seen as Moscow's favored candidate, claim to have won Sunday's runoff vote, although no official result has been announced.