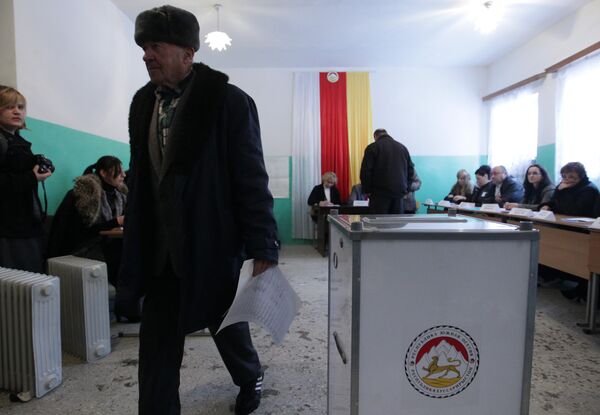 New elections have been slated for March 25, a parliamentary spokesman said.

With the official outcome of the runoff unannounced, the two candidates - former Eductaion Minister Alla Dzhioyeva and Emergencies Minister Anatoly Bibilov - have both claimed victory.

South Ossetia’s Supreme Court on Tuesday reviewed complaints over violations during the runoff. They were filed by the ruling Unity party. Dzhioyeva and her staff boycotted the court hearing.

A spokesman for Dzhioyeva’s election staff described the Supreme Court’s decision as a “power takeover.”

“We did not take part in this [Supreme Council] meeting… we are not responsible for how the situation will develop,” Dzambulat Tedeyev said.

Some 200 supporters have gathered near Dzhioyeva’s staff headquarters to discuss a plan of action with the former presidential candidate.

As of Monday, Dzhioyeva had 56.74 percent of the vote with 74 of 85 districts tallied, the Central Electoral Commission said. But Dzhioyeva's rival Bibilov claimed to have a seven-percentage point lead in the voting.

“The decision whether Anatoly Bibilov will take part in the next elections will not be made by him personally. This issue will be reviewed by a party congress and the candidate's election staff within ten days,” Kudukhov said.

Bibilov himself is inclined not to take part in the new elections, he added.

Bibilov was seen as Moscow’s favored candidate and was widely expected to win. The politician called for "a new beginning" in the region, which still carries scars from the war between Georgia and Russia in 2008.