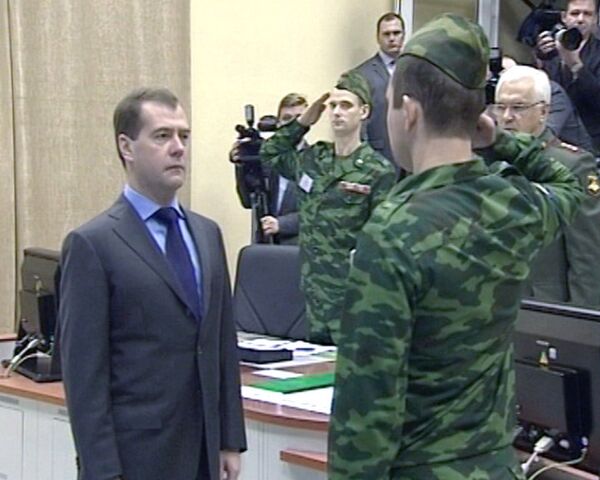 © RIA Novosti
Subscribe
The launch of a new anti-missile radar station in the Russian Baltic Sea region of Kaliningrad should be treated by the West as the “first signal” of Russia’s readiness to counter “threats” posed by NATO’s missile defense plans, Russian President Dmitry Medvedev said on Tuesday.

The launch of a new anti-missile radar station in the Russian Baltic Sea region of Kaliningrad should be treated by the West as the “first signal” of Russia’s readiness to counter “threats” posed by NATO’s missile defense plans, Russian President Dmitry Medvedev said on Tuesday.

The radar, which is capable of monitoring missile launches from the North Atlantic, as well as the United States’ future European missile shield, was put into operation earlier during the day. A source in the Russian Defense Ministry earlier said that the radar will go on combat duty starting December 1.

Addressing the Russian Armed Forces commanders after the radar's inauguration ceremony, Medvedev said its launch was intended to demonstrate Russia’s “readiness for an adequate response to the threats posed by [NATO’s] European missile defense system to out strategic nuclear forces.”

“If our signal is not heard, as I said on November 23, we will continue deploying other defense means,” he said.

Medvedev said in his address to the nation on November 23 that he had ordered the launch of the radar as part of Russia’s reaction to the United States’ missile shield plans. Russia may also deploy Iskander tactical missiles in the Kaliningrad region in the near future, he said.

At the same time, the Kaliningrad radar, which is located at Russia’s western-most border, is “not directed against our Western partners” and “could be used for joint defense,” Medvedev said on Tuesday.

Russia is seeking written, legally binding guarantees that the missile shield will not be directed against it. However, Washington has refused to provide those guarantees to Moscow and said it will not alter its missile defense plans despite increasingly tough rhetoric from Moscow.

“We can no longer be satisfied with a common statement that the phased and adaptive [missile defense] system that is being created is not directed against Russia,” Medvedev said. “Those are empty words, which unfortunately do not guarantee the protection of our interests.”

He added, however, that “if other steps are made,” Moscow will “certainly” take them into consideration.

“But anyway, oral statements are not enough,” he said.