About 800,000 worshipped Christian relic in week 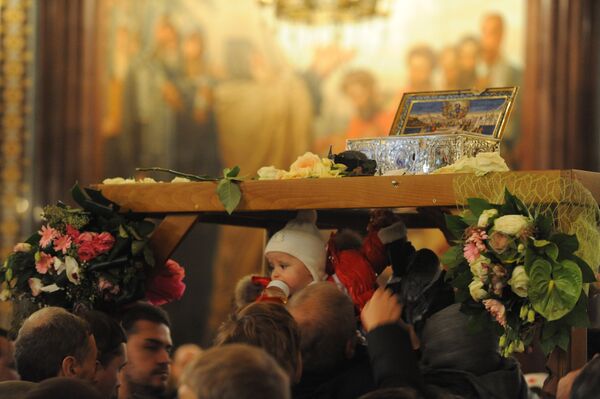 More than 800,000 people visited Moscow's Cathedral of Christ the Savior last week to see the a belt believed to have belonged to the Virgin Mary.

More than 800,000 people visited Moscow's Cathedral of Christ the Savior last week to see the a belt believed to have belonged to the Virgin Mary.

The relic, brought to Russia from Mount Athos in Greece for the first time in history, has been on display in the Cathedral since November 19. The access to the belt will be allowed until 2:00 a.m. Monday [22:00 GMT].

"The total number of pilgrims since November 19 surpassed 800,000 people on Sunday evening. At least 40% of them are residents of other Russian regions, as well as Ukraine, Belarus and Moldova. During this period, over 850 busses with pilgrims arrived to Moscow," a source in the organizing committee said.

Believers from central Russian regions, as well as from other former Soviet states, have poured into the capital to see the belt. The line stretched several km and on some days worshippers had to queue for 24 hours on average.

Over 1,500 policemen, two patrol boats and 25 ambulance cars were on duty to help the believers. The worshippers were provided with free meals and tea as they waited. Some 50 people have been taken to hospital since November 19.

Believers say the Virgin Mary wove the belt out of camel wool and wore it until the end of her Earthly days, when she passed the belt on to the Apostle Thomas.

The relic belongs to the Vatopedi monastery on Mount Athos in Greece. The belt was brought to Russia on October 20 and has already been shown in many Russian cities, including St Petersburg.