Medvedev and Obama move from reset to threats 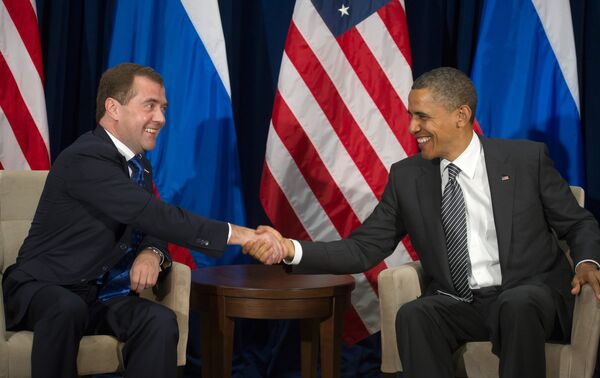 © RIA Novosti . Sergei Guneev
/
Go to the photo bank
Subscribe
I can understand why President Medvedev said Russia would put arms control on hold if the United States continues with its plans to deploy a missile defense shield in Europe.

I can understand why President Medvedev said Russia would put arms control on hold if the United States continues with its plans to deploy a missile defense shield in Europe. The statement was made during the recent APEC forum and summit in Honolulu, where Dmitry Medvedev and Barack Obama met as presidents for the last time.

The two presidents focused on Russia’s World Trade Organization accession and other economic issues, carefully avoiding ballistic missile defense. They only agreed to continue bilateral consultations on this difficult issue. The idea of inviting Obama to Moscow before yearend was voiced, but the U.S. president’s schedule could not accommodate the visit.

This was a rare case in international practice: a publically made invitation was rejected. Such proposals are usually discussed behind closed doors, and if the invited party cannot, for some reason, accept – then the invitation is not made. This alone showed that something was amiss. We now know what it was.

The technical aspects of the measures Russia could take are another matter. Everyone is free to focus on what interests them most.

Associated Press writes that Russian missiles “may target the U.S. missile shield in Europe.” The Russian media points out that Russia’s warheads will be equipped with systems enabling them to evade interception.

As for politics, President Medvedev said: “Given the intrinsic link between strategic offensive and defensive arms, conditions for our withdrawal from the New START Treaty could also arise, and this option is enshrined in the treaty.”

This would be an unsatisfactory conclusion of the two presidents’ terms. They clearly hoped to reach agreement on this issue of mutual concern: they failed. This has endangered, if not derailed, their key achievement – the reset policy.

Why can’t Russia disregard the U.S. inability to abandon its ballistic missile defense (BMD) plans for Europe? Russian opposition experts have ridiculed the Kremlin’s BMD fears as being something of an idée fixe, saying that the system will become dangerous only at the final deployment stage.

Yet there are arguments that explain Medvedev’s reaction.

I am not referring to elections in Russia, as foreign policy is not a prominent feature of the current election campaign. Moreover, the electorate may be disappointed with Medvedev’s statement, which resembles an unpleasant but unavoidable necessity.

Then there is the money factor. The main political event in the United States this week was the collapse of the 12-member Super Committee set up to find ways to cut the national debt. One unpleasant consequence of the two leading parties’ inability to agree on a seemingly intransigent issue concerns the Pentagon budget. Secretary of Defense Leon Panetta will have to launch a program in January 2012 to cut the U.S. defense budget by $450 billion within ten years. But in fact the cuts should be much bigger.

The world is changing, but people remain the same

It would be perfect if Medvedev’s statement on Russia’s possible response to the U.S. ballistic missile shield plans made people consider whether they really need a system that so irritates a country that could potentially at least be a good partner to the United States, if not exactly a friend.

There was a time when Moscow was ready to accept a binding declaration that the BMD systems will not be targeted at Russia. It only asked for a piece of paper, but no such written assurance was forthcoming.

Maybe Americans will reconsider their attitude now, but then again, maybe not.

The BMD issue is enjoying a charmed and irrational life in the United States, which is enough to make one think that the problem is not really missiles or guns – or bows, for that matter. The problem is in people’s minds.

Repeatedly during Medvedev’s and Obama’s presidential terms Moscow pretended that, even though things seem bad, we still understand each other and our views do not differ all that much.

The current differences concern Libya and the broader Middle East area in general, which the United States is leaving in chaos and rubble. They also concern Syria and Iran, although Obama has often said that Washington and Moscow share a common view of Iran’s nuclear future. But is this really the case?

Why do the United States and its allies propose anti-Iranian sanctions as soon as an opportunity arises to reach an agreement with Iran, which is the path Moscow has been advocating? They don’t want to discuss the issue? What do they want then?

There are many other differences, including the Viktor Bout case or hints about a return to the Soviet Union, which sounds like a done deal to the United States even though it is unclear if anyone actually wants to revive that particular dead empire. Overall, this points to the inability of Western societies, not just their governments, to bring a policy that dates back 20 years to a halt.

The world has changed twice in that time. The United States and the EU countries are largely bankrupt and unable to repay their debts. Many other regions in the world are no longer what they were 10 years ago.

The presidents of Russia (a former enemy) – Boris Yeltsin, Vladimir Putin and Dmitry Medvedev – started off their terms by offering the hand of friendship to the West. All of them mentioned, albeit in different circumstances, the theoretical possibility of Russia joining NATO if the alliance were to take its security interests into account. But each time our good intentions were held back by two questions: Do Russians meet NATO standards? If so, why should they be concerned over ballistic missile defense?

As a result, we have what we have.