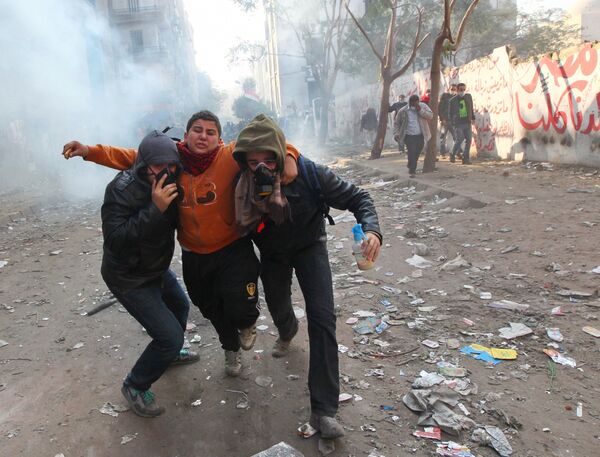 © RIA Novosti . Andrey Stenin
/
Go to the mediabank
Subscribe
International
India
Africa
At least 35 people have died in clashes between protesters and security forces in the Egyptian capital, Cairo, the country's health ministry said on Wednesday.

At least 35 people have died in clashes between protesters and security forces in the Egyptian capital, Cairo, the country's health ministry said on Wednesday.

The ministry also said that over 3,000 people had been injured.

The Egyptian army formed on Wednesday several “human shields” as army officers lined up between protesters and police, urging them to halt the clashes.

Rallies demanding a speedy transition to democratically elected authorities began on Friday and turned violent on Saturday. Violent clashes between protestors and police continued throughout the weekend in Cairo and other cities, forcing the country's entire cabinet to step down on Monday.

But the fighting continued, even after the chairman of Egypt’s Supreme Council of the Armed Forces (SCAF), Field Marshal Hussein Tantawi announced on Tuesday that parliamentary elections would be held on November 28, and presidential elections by the end of June 2012.

Nine months after the February ousting of former President Hosni Mubarak, Tantawi said the ruling military council is ready to hold a referendum on the immediate transfer of power to a civilian administration.

Number of demonstrators, heading to the Tahrir square, is increasing. Security forces intensify the use of tear gas in response to the protests and protesters who started throwing stones, an Anbaa Moscow correspondent reported from the scene.

Demonstrators are carrying posters, saying “We won t leave, the council will leave,” “The people want to get the power back.”