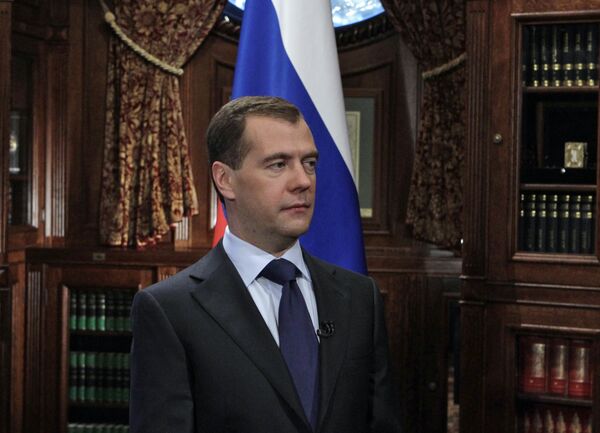 Medvedev's comment came as he outlined a series of possible “appropriate measures” if missile defense talks between Moscow and Washington result in failure. Moscow is seeking written, legal guarantees that the shield will not be directed against it, but Washington has refused to put its verbal assurances in writing.

In a live broadcast on national television, Medvedev said the U.S. and NATO had failed to "take our concerns about the European missile defense into account."

If there was no progress on the issue, he went on, Russia would “deploy in the west and the south of the country advanced offensive weapon systems which will target the European component of the missile defense network.”

Medvedev was speaking ahead of a NATO ministerial meeting in Brussels on December 7-8.

Other military measures outlined by Medvedev included the placement of an early-warning radar in the Russian exclave of Kaliningrad and the increased protection of nuclear deterrent assets around the country.

The U.S and NATO plan to place elements of the European missile shield in Poland and Romania. The Alliance has dismissed Russia’s concerns over the shield, saying it needs it to deal with “rogue states” such as Iran.

Russia and NATO tentatively agreed to cooperate on the European missile defense network at the Lisbon Summit in November 2010, but differences in approaches toward the project led to a deadlock in negotiations.

Medvedev reiterated on Wednesday Russia’s proposal to create a joint missile defense system. He also said, however, that Russia would not participate in a project that went against its interests.

"We will not agree to take part in a project that may weaken our deterrent potential in a relatively short time - five or six or eight years. And the European missile defense is exactly this kind of project," said Medvedev, who steps down next spring to allow his mentor Prime Minister Vladimir Putin to return to the Kremlin.

Russia made similar threats when the George Bush-era missile shield was announced and there was immediate speculation in at home and abroad that Medvedev's tough statements were made to satisfy rising nationalist sentiments ahead of the December 4 parliamentary polls.

Medvedev also said that if talks on the European missile shield develop in a manner unfavorable to Russia, Moscow may halt its disarmament and arms control efforts, including participation in the new strategic arms reduction treaty with the United States.

“Given the direct link between strategic offensive and defensive weapons, reasons could emerge for Russia's withdrawal from the START treaty. This is stipulated by the treaty itself,” he said.

The missile shield dispute between Russia and the United States has undermined efforts to build on improvements in relations between the former Cold War foes and is intensified by Russia's uncertainty over U.S. policy after the November 2012 presidential elections.

At the same time, Medvedev expressed hope that there was still a chance of reaching an agreement with the United States and NATO on missile defense.

“If our partners approach the task of heeding our legitimate security interests in an honest and responsible way, I am sure we will manage to come to terms,” the president said.

He added, though, that Russia would closely monitor the situation and react accordingly to each new phase in the implementation of the European missile shield project.