Pilots in Tajikistan have attained freedom but not justice 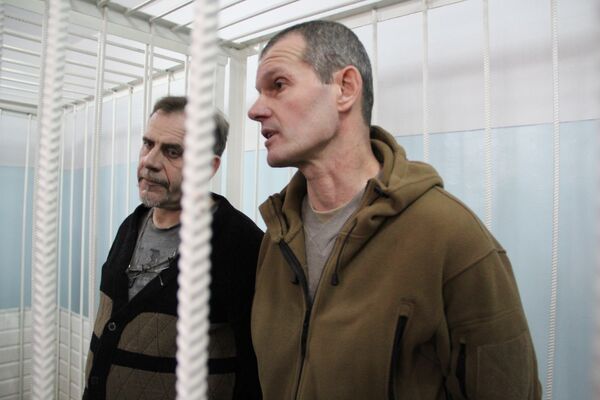 © RIA Novosti . Lidiya Isamova
Subscribe
The release of pilots Vladimir Sadovnichy and Alexei Rudenko in Tajikistan is certainly great news. The inappropriateness of their sentence (eight and a half years in prison) and the attempts of the Tajik authorities to use them as bargaining chips in political trade with Moscow were all too obvious.

The release of pilots Vladimir Sadovnichy and Alexei Rudenko in Tajikistan is certainly great news. The inappropriateness of their sentence (eight and a half years in prison) and the attempts of the Tajik authorities to use them as bargaining chips in political trade with Moscow were all too obvious.

Unfortunately, the pilots' long-awaited release cannot be described as a triumph of justice, and not only because Tajikistan has failed to withdraw its absurd accusations of the illegal border crossing and smuggling. The methods that Moscow used to apply pressure to Dushanbe are also dubious. Why did hundreds of Tajik illegal immigrants appear to be ready for deportation during the first days of the crisis? A foreign citizen, particularly from an allied country, Tajikistan, can only be deported by a court decision.

This means our courts passed hundreds of these decisions in a hurry. The logic is almost the same as in Tajikistan. When the authorities demand certain decisions, the courts obey.

This example provided a good illustration of how this procedure works. After President Emomali Rakhmon took “under his personal control” the case that allegedly did not interest him before, the Tajik Prosecutor’s Office and the court started quickly backpedalling.

It was like watching a movie in reverse: first they reviewed the appeal and replaced eight and a half years in prison with two and a half; then they gave the pilots credit for six months behind bars and pardoned them for the remaining two years. It's unlikely that this case will make Tajikistan a more popular destination. Neither investors, nor tourists, nor anyone else would be apt to like the idea that their courts are prepared to revise their verdicts at a mere hint.

Still worse, the pilots were released not because they were found not guilty. They are still considered guilty but will not be punished any further.
Their refusal to exonerate the pilots is a typical move for post-Soviet republics. Exoneration means admitting a mistake and having to apologize for it, which amounts to a terrible humiliation for a post-Soviet leader that must be avoided at all costs.

However, by refusing to apologize Rakhmon has taken another risk: he has given Moscow an excuse to preserve the sanctions that it has already imposed against Tajikistan.

International politics is almost as cynical as domestic politics. Quarreling over everything is bad taste – sometimes it's better to accept the inevitable. Such a sensitive issue as the status of citizens of the former parent state on the territory of a former colony is no exception.

At one time, Britain had to resign itself to accepting the change in status of its colonists in Africa, when they suddenly became a White minority in countries with Black governments. London had only one demand with regard to its compatriots – that they should be allowed to live by the same laws as the people in the newly-independent African countries (almost all former British colonies adopted civilized codes of law, but regrettably, they were not always observed).

Sanctions were imposed on the Mugabe regime in Zimbabwe, not for its refusal to accept British rule but for its failure to observe its own laws regarding White and Black citizens.

When do our CIS neighbors fall out of favor with Moscow? From our end, alas, this usually amounts to falling out of favor, rather than a smart and consistent policy.

Aren’t the rights of Russian citizens in Turkmenistan trampled underfoot even more rudely than in this case with the pilots in Tajikistan? Has Ukraine under Viktor Yanukovych given up its discriminatory norms against the Russian language that emerged under Leonid Kuchma and Viktor Yushchenko? Not in the slightest.

The difference is that Yushchenko openly quarreled with top Russian officials, becoming a pariah and an enemy with whom there was nothing to talk about. Meanwhile, Yanukovych and Gurbanguly Berdymukhamedov were lucky enough to avoid such quarrels with Russia, and our relations with their respective countries seem to be fine.

Tajik legislation is civilized – there are provisions for NGOs, for the opposition and for the inviolability of the individual. But Tajikistan has never made any effort to abide by its own legislation, and Russia has not concerned itself with this for many years.
Then why is Russia so concerned about this in the case of the pilots? Apparently the verdict for the pilots was the last straw, but not as a crude violation of the rights of Russian citizens but as yet another personal attack on Russian officials.

Rakhmon has openly exerted pressure on President Dmitry Medvedev for a number of years. On one occasion the Tajik leader did not like Medvedev's speech in Uzbekistan about a new hydro electric power station with Russian participation. On another occasion he was displeased about the inadequate repentance of the Russian government for the crimes of the Stalinist regime.

If Rakhmon thought he was dealing with a refined intellectual who is incapable of striking back, he made a mistake. But anyway, there is a bad aftertaste – justice has not triumphed.