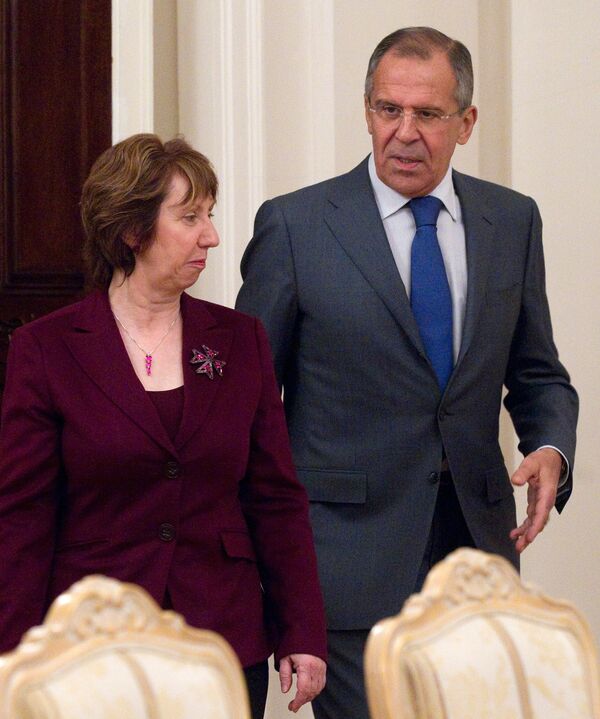 © RIA Novosti . Vitaliy Belousov
/
Go to the photo bank
Subscribe
Russia hopes the new resolution on Iran, agreed by a group of international mediators, will be adopted on Friday, Foreign Minister Sergei Lavrov said on Thursday.

Russia hopes the new resolution on Iran, agreed by a group of international mediators, will be adopted on Friday, Foreign Minister Sergei Lavrov said on Thursday.

“The representatives of the Iran Six in the [International Atomic Energy Agency’s] Board of Governors agreed the resolution at the current meeting. We expect it to be adopted tomorrow,” Lavrov said after talks with EU High Representative for Foreign Affairs and Security Policy Catherine Ashton in Moscow.

The Iran Six, comprising Russia, the United States, China, Britain, France and Germany, have been trying since 2003 to convince Iran to halt its uranium enrichment program.

Earlier in the day, IAEA chief Yukiya Amano said the information contained in the agency’s latest report the military dimension of Iran's nuclear program is credible.

Western powers and Israel suspect Iran of seeking to build nuclear weapons. Iran denies this, saying its program is of a civilian nature. Speculation has been building that Israel is considering a preemptive strike on Iran's nuclear facilities.

Ashton told reporters: “I believe that dialogue is the best way to achieve the outcome that we all want for the safety and security of the people of Iran, and for the region and beyond.”

She added, however, that the international community should pressure Iran to achieve its goals.