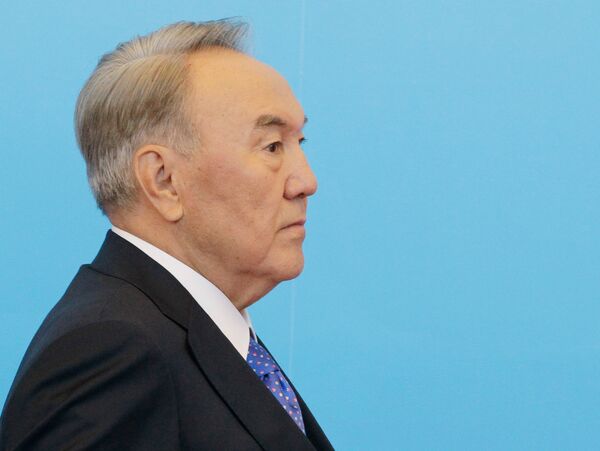 © RIA Novosti
/
Go to the photo bank
Subscribe
Kazakh President Nursultan Nazarbayev has signed a decree to dissolve the lower house of parliament, the Mazhilis, and set early elections for January 15, 2012.

Kazakh President Nursultan Nazarbayev has signed a decree to dissolve the lower house of parliament, the Mazhilis, and set early elections for January 15, 2012.

The decree was published in official media on Wednesday.

In line with the law, 98 deputies of the 107-seat Mazhilis are elected on party lists on the basis of universal, equal and direct suffrage by secret ballot. Nine deputies are elected by the Assembly of People of Kazakhstan.

Last week, lower house deputies asked the head of state to terminate their powers ahead of schedule and set snap elections.

Elections to the Mazhilis were to have been held in August 2012, but 53 lower house members told Nazarbayev that the chamber needs to be disbanded ahead of time due to the necessity to switch to a multiparty parliament.

In line with recent constitutional amendments, the next parliament should be formed from at least two political parties.

Besides, deputies said, a new wave of the economic crisis is expected next year, and Kazakhstan, which could be affected, should hold elections prior to facing economic problems.

A pollster backed by the ruling Nur Otan party said over 67% of Kazakhs support the initiative to dissolve the Mazhilis.