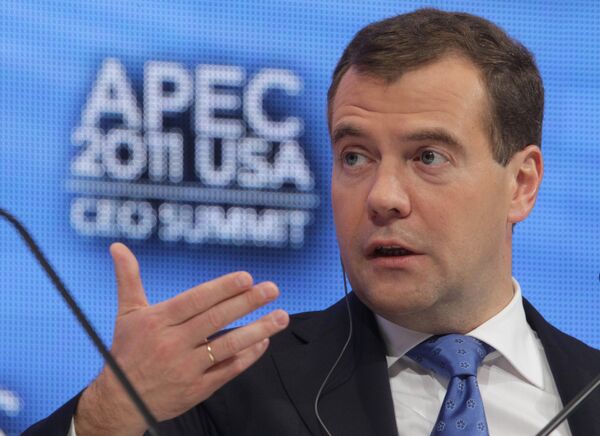 © RIA Novosti . Ekaterina Shtukina
/
Go to the mediabank
Subscribe
International
India
Africa
Russian President Dmitry Medvedev announced that he would deliver a complete assessment on the U.S.-backed European missile defense system in the near future.

Russian President Dmitry Medvedev announced that he would deliver a complete assessment on the U.S.-backed European missile defense system in the near future.

"It is unclear to us what our partners are offering, and I think we will in the near future determine what we should do with the European missile defensive system," Medvedev said at a press conference after the Asian-Pacific Economic Cooperation summit in Hawaii.

"I believe that in the near future I will have to give a complete assessment on how Russia is to react to the developing situation now as well as after 2012," Medvedev said.

Medvedev added that he was pleased over talks with U.S. President Barack Obama over the last year and said that Russian-U.S. relations over the past several years have reached several goals, including Russia's entering the World Trade Organization (WTO); however, said that the European missile defense system was more difficult.

"In regard to the European missile defense system, the situation is much more difficult," he said.

Russia and NATO agreed to cooperate on the so-called European missile shield during the NATO-Russia Council summit in Lisbon in November 2010. NATO insists there should be two independent systems that exchange information, while Russia favors a joint system with full-scale interoperability.

Bucharest announced in May that it had reached an agreement with the United States to deploy a U.S. missile interceptor system at a defunct Soviet airbase on its territory. Moscow issued an urgent request for legal guarantees from the United States that the system will not target Russia's strategic nuclear forces.

Washington has so far declined to give Moscow any written guarantees that the missile defense system would not be targeted against Russian military defense systems.