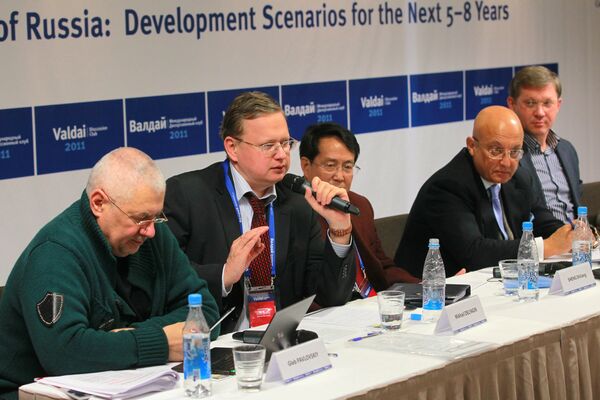 Twenty years after the fall of the Soviet Union, Russia is at a major strategic crossroads and the choices its leaders make in the next few years will determine what kind of state it will be in for generations to come, political analysts said this week.

Twenty years after the fall of the Soviet Union, Russia is at a major strategic crossroads and the choices its leaders make in the next few years will determine what kind of state it will be in for generations to come, political analysts said this week.

"A real multipolar world is emerging," said Andrew Kuchins, director of the Russia and Eurasia program at the Washington-based Center for Strategic and International Studies. "Russia's biggest challenge is to make itself an attractive pole.”

Kuchins was among around 100 experts on Russia policy from the United States, Europe, Asia and Russia itself who are members of the Valdai Discussion Club, which is meeting this week outside Moscow to analyze scenarios for Russia's development in the next five to eight years.

After reviewing several scenarios for the country’s development, the experts largely agreed that whatever modernization takes place in Russia it will be orchestrated from the Kremlin. In the meantime, they ruled out the possibility of a democratic revolution in Russia.

In the meantime, several analysts believe that the country’s leadership has only vague ideas about what should be done in order to boost Russia’s development, while Russia’s bureaucracy is the most hated part of the country’s ruling class.

While most of the public anger reveals itself in the blooming Russian blogosphere, the majority of the population, including those discontented with the Russian authorities, choose to support them because they don’t want any revolutions, the experts concurred.

Meanwhile, Russia’s emergence as of an attractive actor of the global arena depends upon how effective it will be in addressing some issues on the domestic agenda and having a foreign policy that is based on consensus rather than intimidation and coercion, Kuchins said.

Thomas Gomart, another Valdai club expert and vice-president for strategic development with the Paris-based French Institute of International Relations, agreed with Kuchins' assessment.

The biggest challenge in the coming years for Vladimir Putin, the current prime minister and Russia's top leader who is expected to return to the post of president next year, will be to build trust among the Russian people in the state that he has been instrumental in shaping since the late 1990s, Gomart said.

"Observing from the outside, the decision-making elites seem very sure of themselves," he said. The challenge now is to give this confidence to the Russian people... and to find the right posture in relations with the outside world."

Russia’s development will almost certainly be tied closely to Putin, who announced earlier this year that he would again run for president in elections next March and which he is set to win.

Putin served two consecutive terms as president from 2000 to 2008.

Russia has since extended presidential terms to six years, making it possible in theory for Putin to hold the top job until 2024.

The Valdai experts were due to meet face to face with Putin later this week to discuss Russia's development with him directly.