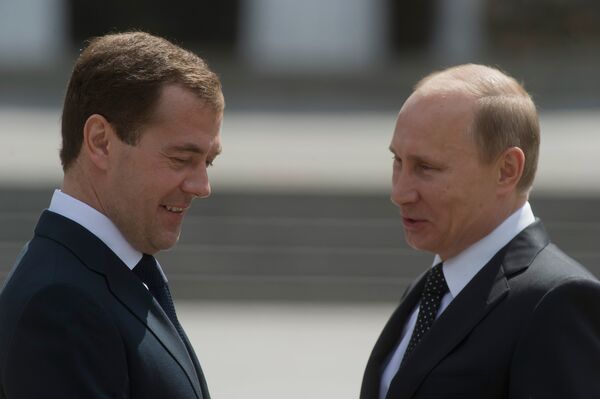 With less than four weeks left before Russia’s parliamentary elections, the approval ratings of the country’s leadership "tandem" and the ruling United Russia party have dropped sharply.

While pointing to growing frustration with Russia's political process, analysts are unable to pinpoint specific events behind the decline.

A survey conducted by Levada Center between October 28 and November 1 shows just 51 percent of Russians support United Russia, a drop of nine percentage points in just a week. The popularity of Prime Minister Vladimir Putin and President Dmitry Medvedev, who will lead the party in the December 4 voting, have dropped five percentage points each to 61 percent and 57 percent respectively since mid-October. Levada Center polled 1,600 people around the country, with a margin of error of 3.4 percentage points.

The results from state-run pollster VTsIOM paint an even gloomier picture, putting Putin's approval rating at 42 percent and Medvedev's at 31 percent, a decline of six and seven percentage points since mid-October, respectively. The poll, conducted in late October, included 1,600 people and had a margin of error of 3.4 percentage points.

“The latest ratings drop is difficult to explain, because no serious processes that could result in such serious dynamics are taking place now,” said Olga Mefodyeva of the Centre for Political Technologies.

While United Russia’s election campaign is cause for “irritation and sarcasm” among residents in some Russian regions, this is unlikely to have affected the party’s national rating, she said.

The ruling tandem and governing party’s popularity has gradually decreased since early 2010. In January last year, some 80 percent of Russians said they trusted in Putin and 75-77 percent in Medvedev, according to various polls.

“The fact that Medvedev and Putin’s ratings have long been falling can be explained by post-crisis sentiment, some kind of lassitude and a lack of a positive agenda and qualitative systematic changes,” the analyst said. “It’s clear that everyone is tired of the tandem and United Russia.”

'Medvedev does not fit the bill'

Levada Center analyst Lyudmila Sergeyeva suggested that United Russia and its leaders’ falling popularity could be “the echo of the [party] congress” held on September 23-24, during which Medvedev and Putin announced their plans to exchange jobs after the presidential elections due in March 2012.

The announcement that Putin will run for president in 2012 ended months of intense speculation about the powerful Russian prime minister’s possible return to the Kremlin. Medvedev, who succeeded Putin as Russia’s president in 2008, agreed to lead United Russia in the December 4 parliamentary polls and replace Putin as prime minister in the country's next government.

Most Russians “will be happy with the result of the March 2012 elections which was practically announced” at the congress, Sergeyeva said. But people who “wanted more independence in making their decision” were “probably unhappy with the form” of the tandem’s decision-making.

Long before the September congress, Putin and Medvedev said they would not run against each other in the 2012 elections. When asked just weeks before the congress which of them will run, they still insisted the decision would be made depending on the political situation in the country.

Soon after the congress, however, Medvedev admitted that Putin’s return to the Kremlin was agreed back in 2008, when he became president.

There is “certainly some kind of disappointment” among Russians with the country’s one-party political system, Sergeyeva said.

Mefodyeva dismissed suggestions that the falling ratings were caused by the Kremlin job swap announcement, because “60 percent of citizens” want Putin as president.

"The average Russian citizen is happy that Vladimir Putin is returning,” she said. As for “frustration,” she said it is only applies to a “socially active, 20-percent minority,” who viewed Medvedev as their leader.

Medvedev “has been trying to demonstrate with all his policies that he is liberal-oriented,” which has pleased “the most intellectual and wealthiest” part of Russian society, Mefodyeva said. But “according to psychologists, Medvedev does not fit the bill.”

Political analyst Sam Greene agreed there was “a certain amount of frustration” in Russian society that can be explained by failed expectations for a quick post-crisis recovery and “uncertainty about where the economy is going.”

But the results of the recent polls indicate a general trend when people’s responsibility for their political choice grows as elections near, the analyst said, adding that those results “may actually be a more electorally relevant representation of support for Putin and Medvedev than what we saw in the polls months and years ago.”

“Now we are facing elections that most people understand will confirm a certain power structure in the country… for a number of years to come,” he said.

Electoral support does not often reflect the levels of approval in polls like these, the analyst said.

“If I were Putin or Medvedev...I would not be that worried about what those polls mean for the elections,” he said, “although I would probably start to think about what the meaning has been of all of those high levels of support that the polls have shown over the last several years.”