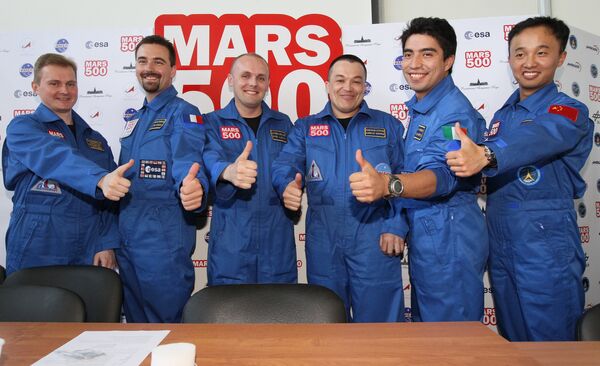 © RIA Novosti . Aleksei Kudenko
/
Go to the photo bank
Subscribe
What would it be like to spend some 18 months confined in a spaceship as you hurtle through the blackness of space towards Mars? No one knows for sure, but the Moscow-based Mars 500 experiment attempted to recreate at least some of the conditions by locking six men away in a mock spacecraft.

What would it be like to spend some 18 months confined in a spaceship as you hurtle through the blackness of space towards Mars? No one knows for sure, but the Moscow-based Mars500 experiment attempted to recreate at least some of the conditions by locking six men away in a mock spacecraft.

Despite fears of cabin fever, the participants in this unique experiment emerged in good health and spirits late last week. On Tuesday, the six men - three Russians, one Italian, one French and one Chinese - described how what they had learnt during the 520 days of their mission.

“It put me more in contact with my own humanity,” said European Space Agency (Esa) participant Diego Urbina, who confessed before “departure” in June last year that British rock singer Elton John’s song Rocket man was his inspiration.

“You learn that you’re not Superman,” Urbina added.

“This mission was a success, so we can move forward in our plan to go to Mars, humans can go there,” said the French crew-member Romain Charles.

Russian Alexander Smoleyevskiy said his experience of his military service in the Soviet army helped him pull through.

The six have been in quarantine since they emerged from their cramped windowless capsule in northwest Moscow on Friday, after 17-plus months of uninterrupted isolation.

For much of that time, they had had only limited contact with the outside world, with a 20-minute time delays in communications to simulate the lag it would take real radio messages to travel the vast distance between Mars and Earth, and underwent stress tests such as a total communication blackout.

The venture, run by Russia’s Institute of Biomedical Problems with the participation of Esa, even included a mock landing on Mars.

Project chief Boris Morukov said that while the study “could not simulate all factors,” such as constant weightlessness and some of the radiation dangers that exist in space, it will provide clues as to how humans could cope, psychologically as well as physiologically, on a long journey to another world.

“At the centre of our attention in this experiment was Man, and the conditions which are characteristic of an interplanetary flight: autonomy, the impossibility of replenishing resources, and communication,” Morukov said.

Morukov, himself an astronaut, said the experiment would not stop at the Moscow hangar and suggested extending missions to the International Space Station (ISS) and carrying out a similar experiment in orbit.

“Today, [astronauts] go for 4-6 months. This is not enough to experience in full the effects of micro gravitation similar to those encountered on a lengthy interplanetary flight,” he said.

“It is also hard to recreate at the ISS the atmosphere of isolation which our researches have encountered,” he added.

While a real Mars mission is still decades away, the Mars500 astronauts all said they were ready to participate.