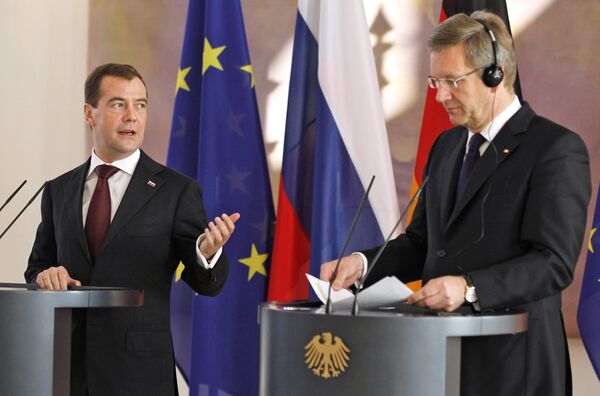 Russian President Dmitry Medvedev on Tuesday said increasing anti-Iranian rhetoric could lead to a catastrophe in the Middle East.

A new International Atomic Energy Agency report on Iran’s nuclear program will be released on Wednesday. Its details, some of which have been leaked, have prompted speculation over a possible military strike on Iran by Israel.

Senior members of the Israeli government have reportedly backed the possibility of striking Iran’s nuclear facilities, having been updated on Tehran’s secretive progress toward building a nuclear weapon, American sources told Fox television on Sunday.

Israeli President Shimon Peres reiterated Sunday that an attack on Iran is becoming increasingly likely. The possibility of a military attack against Iran is now closer to being applied than the application of a diplomatic option," Peres told the Israel Hayom daily.

But Israeli Defense Minister Ehud Barack on Tuesday said Tel Aviv would not embark on any military operation against Iran.

“As for the belligerent statements that Israel or anyone else is ready to apply force against Iran...that’s pretty dangerous rhetoric,” Medvedev said at a joint press conference with his German counterpart Christian Wulff.

“We realize that emotions in he Middle East are running high… the peace process has reached a dead end, there is no development. But military rhetoric could have grave consequences, all the way to conflict,” Medvedev went on.

He called on the Middle East to “breathe out, calm down and continue constructive discussion of the questions on the agenda, rather than threaten with strikes.”

“This all could end up as war – a catastrophe for the Middle East.”

Later on Tuesday, the Russian Foreign Ministry expressed dismay that the IAEA report due to be published soon has become a source of increased tension surrounding Iran's nuclear program.

"Even before the official publication among the IAEA member states in Vienna, the report has become a cause for speculation, rumors and political gossip, which of course does little to honor those who are currently engaged in ratcheting up the current alarm," the Foreign Ministry's press office said in a commentary.

It also questioned whether the IAEA was able ensure the appropriate confidentiality for its work, adding that the IAEA should be guided by the principle: "Do no harm."