Baby boxes for unwanted newborns to appear in Russia 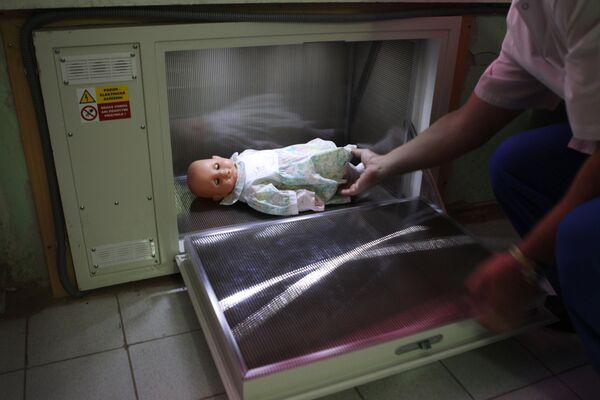 So-called baby boxes will be installed across Russia for mothers to anonymously drop off unwanted newborns, health officials said on Monday.

The move is aimed at providing sanitary conditions for unwanted children, rather than "having them left in garbage containers," the officials said.

Five baby boxes have already been placed in south Russia's Krasnodar Territory and another two will be purchased soon. Baby boxes - which cost around 10,000 euros each - will be placed near hospitals.

“So far no woman has left a child in them [boxes],” said Krasnodar health department official Tamara Perepelkina.

She said that women would not be persecuted for abandoning their babies.

“Our goal is to save the child’s life,” Perepelkina said. “We set up the baby boxes...in places remote from video cameras and security officers,” she said.

She added that six women had been charged with murdering their babies or leaving their child in danger in January-September.

The project will soon involve the Siberian cities of Perm, Tomsk, Omsk, Novosibirsk and the European Russian town of Kirov.

In Russia, Empress Catherine II was the first to open an orphanage. The Moscow establishment had an affiliated maternity hospital for impoverished pregnant women.